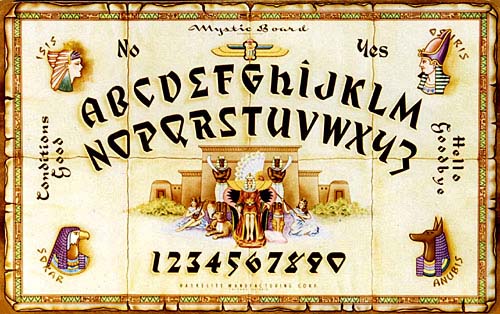 (Notice it is called a Mystic Board and not a Ouija Board, due to trademark protections)

Have you ever used a Ouija Board?  Pretty creepy isn't it.  In fact it is so creepy that you have to wonder how it found its way into the game aisle at most toy stores. 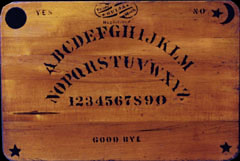 An original design from 1891

It seems it has been around since the 19th century when speaking to the spirits of the dead was highly in fashion.  Seers like the Fox Sisters and Madame Blavatsky were so adept at their craft that they even convinced people like William James (a very serious philosopher) and Arthur Conan Doyle.  I found a great website where you can learn more about Ouija and where I found these great images – The Museum of Talking Boards. 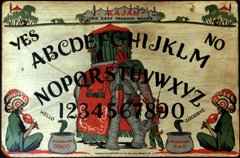 Ouija Boards became popular as a family entertainment when a gentleman named Elija Bond produced the first commercial version and received a patent in 1891.  He also trademarked the name Ouija which was said to have come to him when using the board.  Parker Brothers bought the rights in 1966 and Hasbro in turn bought Parker in 1991.

I think some of these old boards are beautiful.