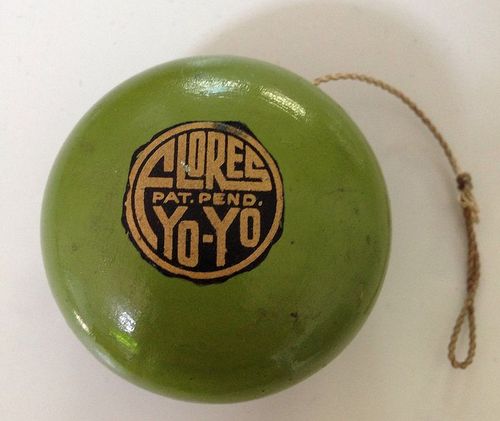 Sometimes classic toys become so ubiquitous that we stop seeing them.  I think the Yo Yo is one of those invisible toys so I thought it would be interesting to take a moment and admire its simplicity and elegance.

Pedro Flores is credited with popularizing the Yo Yo in the United States and then selling his company to Donald Duncan in 1929.  Duncan actually trademarked the  word "Yo-yo" in 1932.  From that time until 1965 when the Royal company successfully sued them, no other company could call a "Yo Yo" a "Yo Yo". Louis the XVII with his Yo Yo (Bandalore)

But more important than the history, take a moment and really look at a wooden Yo Yo.  Its so elegant in its simplicity; two circular pieces of wood joined together by a peg and motivated by a white piece of strength and a talented hand.  Utilizing potential and kinetic energy, Its a perfectly designed little machine.

Its an ancient product (dating back at least 2500 years but its design follows the modern mantra of "form follows function."  And it provides a wonderful sense of mastery from the simplest  (getting it move go up and down) to the most complex of tricks.

And yes, it is justifiably in the Toy Hall of Fame.