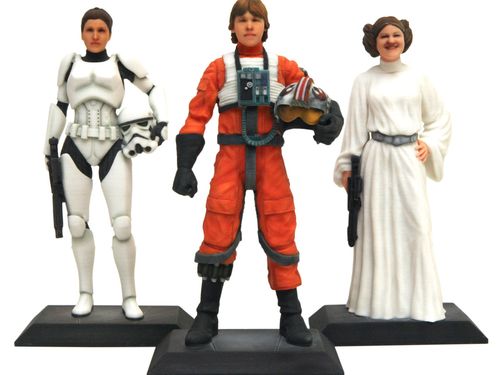 Toys R Us premiered its 147 Star Wars themed toys today and I would bet on all of these products selling out.  Yes, and that includes everything from the item at the top spot on the page, Star Wars: Episode VII The Force Awakens – Darth Vader(TM) Animatronic Interactive Figure to the Star Wars Double Wall Tumbler, 16 ounce at the bottom spot.

Why do I think that?  Well, first of all because its Star Wars.  Mostly, however, because I remember 1977 when a toy company was able to sell empty Star Wars boxes.  Here is the story:  The original movie launched May 25, 1977 and the movie was so hot that Kenner, then the license holder, almost immediately sold out of all of its toys.  The company was understandably unprepared for what was going to become a licensing juggernaut that is still rolling along decades later.  Kenner was looking at months with no product to fill the void.

The company came up with an idea that was so audacious that it would be historic in retailing:  Kenner sold empty boxes containing a “Star Wars” Early Bird Certificate that entitled the purchaser to a Star Wars figure when they were available.  Children waited impatiently for months but did finally receive their Darth Vader, Han Solo or R2D2 figure.

Those kids now in their 40's, are parents.  They will, today, probably still buy an empty box and that is why they will buy themselves and their children anything available in Star Wars.   The Force is still with Star Wars and it is certainly going to be with Hasbro, Toys R Us and Lego this weekend.