We are so used to seeing the American style in toys as the world standard that it is helpful to look back to a time when toys were more indigenous to their home culture (see "Russian Toys from the 1920's through the 1950's" and "Japanese Toy Designs from the Late 19th and Early 20th Century").  Here are some toys from pre-World War II France:

Produced by Jouet Scientifique sometime in the 1930's, this stunning "Gyroplane" (see above) is made of metal.  More work of art than toy, it is a tribute to the French passion for art in all aspects of life. This beautiful, and a bit eccentric, wooden construction toy is name Je Batis which roughly translates as "I Build."  I could not find who made the toy nor am I sure of the reason for the pieces with decorated fronts. I love the wooden box and all the wooden elements.  Wouldn't this look great displayed on your coffee table. 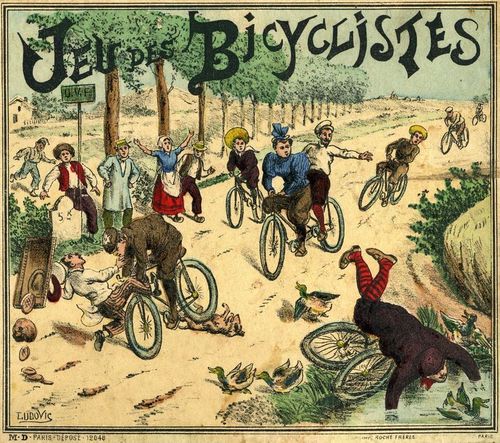 Jeu Des Bicyclistes has probably one of the great box covers of all time.  Look at the mayhem depicted with a man crushing a pig on his way to probably crippling the local baker.  It is made by M.-D. Paris and contains a disappointing monotone playing board and cards.  It is dated to late 19th / early 20th century. These beautiful chess pieces, created at the turn of the 20th century, depict the competing French and British armies at the Battle of Waterloo.  Napoleon and Josephine are depicted as is the Duke of Wellington.  I could not find who made the set.  As far as historical context, if this set was created in the year 1900, it would have been 85 years since the battle took place.  That would be the equivalent to looking back to the period between the world wars for those of us alive today.