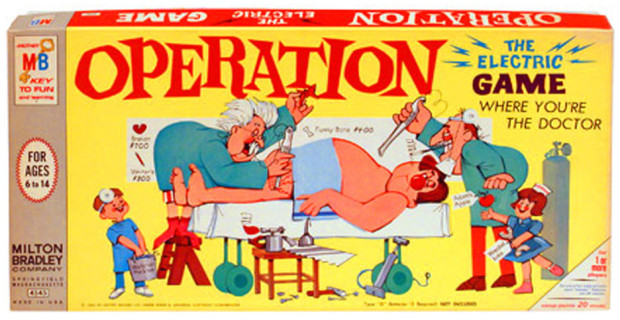 John Spinello only made $500 from selling his patent to the classic game Operation in 1964. Fifty years later, he found himself in the position of needing an operation of his own that he couldn’t afford. Last fall, Tim Walsh and Peggy Brown launched a Crowdrise Campaign to help John get that operation. Over 1,200 people pitched in and raised $32,422 for John and the campaign went viral. John’s story was picked up on Good Morning America, Inside Edition, NBC Nightly News, Jimmy Kimmel Live and over 100 other media outlets.

But the story didn't end there. There is a twist! So, here I interview Peggy and Tim about the story and they ask that you help them tell the even BIGGER story!

How crazy was it when your campaign for John went viral?

Tim: Peggy and I were on severe overtime for two weeks straight. We had over 1,200 donations come in to John, each of which generated an email to us. We took the time to send thankyous back to each person. That was important to us. We set up a website for people to write to John and received over 500 more letters there. Just managing the campaign was a challenge. Then there was the media crush.

Peggy: John and his wife, Madeline are such sweet people, when it started to get crazy we felt we had to organize and filter the media requests for them. Some of the media got really pushy and we didn’t want John subject to that. Basically we turned into agents and media managers for him. He had camera crews in his house for 2 solid weeks!

Where did the idea of a Crowdfunding campaign come from? Are you close to John?

Tim: I met John in 2004 when I was researching my book, Timeless Toys and just fell in love with the guy. Right away I was struck by how joyful he was despite having struck a bad deal on his prototype with Marvin Glass. Even though he missed out on millions of dollars in royalties, he made a conscious decision to celebrate the joy the game brought people, instead of dwelling on his missed opportunity. How can you not admire that?

Peggy: Tim brought John and his wife, Madeline, to the TAGIE Awards as his guests of honor a few years later and they sat at the same table as me. We just hit it off. As the years went by, Tim and I grew closer to them and went to their house for dinner nearly every year during CHITAG week. A couple years ago we noticed a general decline in John’s health and we broached the subject with him. John told us he needed $25,000 worth of oral surgery that he couldn’t afford and on the way back downtown, Tim said to me, “If a fraction of the people who ever played Operation would each send John a few bucks, his money troubles would be over,” so we decided to do something.

Tim: It took some cajoling on our part to convince John to do it, because he’s a private person. A few years prior a friend of mine had suggested crowdfunding as a means to get John some money that he missed out on all those years ago, but John refused that. When his need for surgery became dire and their financial situation worsened, the timing and the reason for doing it was right. “The inventor of Operation needs an operation.” We knew that people who loved Operation and heard John’s story would help. We knew the toy industry would respond to help one of its own too.

Tell us about Hasbro’s involvement. How did they come to buy John’s prototype?

Tim: Brian Chapman, Leif Askeland, Phil Sage, Rich Mazel, Dougal Grimes – everyone at Hasbro has been great. We got in touch with them before the campaign for John launched and they supported us from the start, allowing us to use the Operation trademark and game images on our websites, and in many other ways we can’t possibly list here. We approached them to buy John’s prototype and they generously agreed. Now it’s in their offices in Rhode Island in a place of prominence, where it should be.

It’s such a feel-good story. Why do you think it strikes such a nerve with people?

Peggy: Well the game is iconic, of course. Who hasn’t played it? I can still go right to the spot on my Aunt Judy’s floor where I used to play it with my cousins. John is very likable, so that helps, and the irony of the inventor of Operation needing an operation was not lost on us. But I think the thing we didn’t account for is the far reaching impact of the game – the impact of play. We did not expect so many email messages from nurses, doctors and surgeons. That blew us away. They brought tears to our eyes.

Talk about that. The email messages from people in the medical community are what spawned the film right?

Tim: When the first few email messages from doctors came in, Peggy and I briefly discussed making a film, but quickly dismissed the idea. We had just back-burnered all our own work to run this campaign for John and having co-edited a film called Toyland, I knew how much work a documentary film could be. But then we got the email from Dr. Goldstone at Johns Hopkins and that changed everything.He wrote to tell John that he was inspired by playing Operation himself as a child, to invent a device that alerts surgeons when they are getting too close to delicate nerves during surgery. The device literally sets off a buzzer in the operating room! It works just like Operation, but in real operations!

Peggy: Dr. Goldstone told us that his device, which he patented and licensed to a medical device company, has been used in nearly a million surgeries around the world. Think about that for a moment. John’s game has touched many more people, in many more ways, than he or anyone else could have ever imagined. That’s the power of play. We’re all connected by it.

So where are you now in the filmmaking process?

Tim: We’re about halfway done filming. Peggy and I have $25,000 of our own money into the project and we could stop now and edit together a short film, but we want to try and swing for the fences. We’re trying to raise $50,000 on IndieGoGo so we can put together a corporate fund-raising trailer and make a full-length film worthy of Sundance, Cannes or Tribeca, with animation, music, celebrities who love Operation, and the whole shebang.

How can our readers help get the project off the ground?

Peggy: They can participate in our IndieGoGo Campaign. Any donation amount would help, and because we’re operating through From the Heart Productions, which is a registered 501(c) 3 non-profit organization, 100% of any contribution to the campaign is fully tax deductible. We hope everyone reading this will help us promote the power of play.

Tim: Seriously, what better evidence is there that play has the power to transform us? If nurses, doctors and surgeons tell you that playing with a game about surgery influenced them to enter the medical field, than what other proof does the world need? Play matters.

Indeed it does. To see an advance screening of Buzz Heard ’Round the World: The Inventor of Operation and the Power of Play at CHITAG this year, get tickets at: http://www.igg.me/at/BuzzDoc.