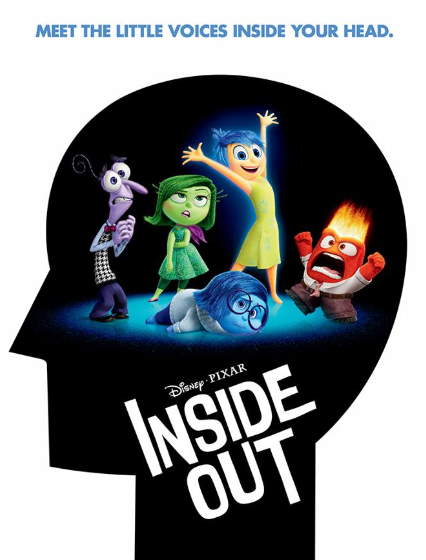 Last weekend, UAE theatres witnessed the release of the new animated comedy drama movie Inside Out which has been produced by Pixar Animation Studios and released by Walt Disney Pictures.

The movie tells a story of a young girl, Riley who has moved with her parents to San Francisco and has been struggling to adjust to her new life (new house, school and friends). Guided mainly by her emotions – Joy, Fear, Anger, Disgust and Sadness who live in the headquarter (the control center) in Riley’s mind and control her actions and memories via a control console, Riley tries to adjust to her new life while her emotions conflict on how best to adapt to the new environment. Here are some main facts from the movie to give you a better idea about it (I still recommend to watch the movie!): The movie gets really interesting after Sadness starts touching various core memories turning them into sad ones (shifting their colors from gold which means happy to blue which refers to sad memories), this would directly result in negative consequences on Riley’s feelings and behaviors and leads her to lose her core memories and her 5 main islands while engaging more deeply in her sadness. Here comes Joy’s role in trying to prevent this from happening to keep Riley happy. And while Joy was trying her best to keep Sadness away she later realizes the importance of this emotion and the great role it played earlier in creating happy core memories for Riley during her childhood. As an example: When Riley lost in her Hockey tournament and felt deeply sad, her family and friends offered her great support that led Riley to be happy again and created a core memory about this happy moment and also activated both the family and friendship islands in her mind. Eventually at the end of the movie all emotions embrace each other and work as a team to help Riley become happy as she was before and adjust to her new life. Furthermore, the 5 main islands were restored again, some of them were further expanded like family and friendship and new islands of personality were created.

Now the main reason why I find the movie to be amazing, because it successfully spotted the light on a very important life aspect that we all whether kids or adults experience and are guided with “Our Precious Emotions”. The story adds a real value to both audiences’ by educating them on self-awareness and emotional intelligence, which I find as an extremely positive and healthy knowledge for kids to have at a young age. Moreover, the medium used (inventive animated movie translated to real life with beautiful collection of figures and plush toys) is a great way to raise kids’ awareness on various emotions which control their behaviors and give them the opportunity to better understand what’s going inside their minds through playing with the character and console control toys in real life.

And since our emotional well-being is part of the 7 main life aspects: Spiritual, Health, Personal, Family, Social, Career and Financial it will be great to see more toys which are non character based that teach kids and raise their awareness on this basic knowledge which they need in order to lead a happy, successful and balanced life. This knowledge can portray the main messages under each aspect like the importance of healthy eating, physical fitness, education about ethics, values, positive attitude, goals setting, importance of family and social relations and many other beneficial information.

Personally after watching the movie I managed to understand my emotions better and the reason why some people act in certain ways. I also got myself Joy Plush Toy to remind me keep the joy alive as much as possible, while still appreciating Sadness and some of its great benefits in making me feel grateful about the wonderful and supportive people in my life.