The list of Academy Award nominees for 2015 included The Imitation Game, the highest-grossing independent film of the previous year. The film tells part of the life story, with plenty of artistic license, of England’s Alan Turing. Most famous for playing a key role on the top secret team that solved Nazi Germany’s Enigma code during World War II, Turing (1912–1954) was also recognized as a pioneering computer scientist, a mathematician, a logician, a philosopher, and a marathon runner.
He devised a test, now known as the Turing Test, to define a standard for a machine to be called intelligent. That test is still widely discussed, championed, and challenged among scholars, and still in use in multiple applications. And it is based on the results of a game—“the imitation game.” If alive today Alan Turing would be called, I’m convinced, a consummate gamer. 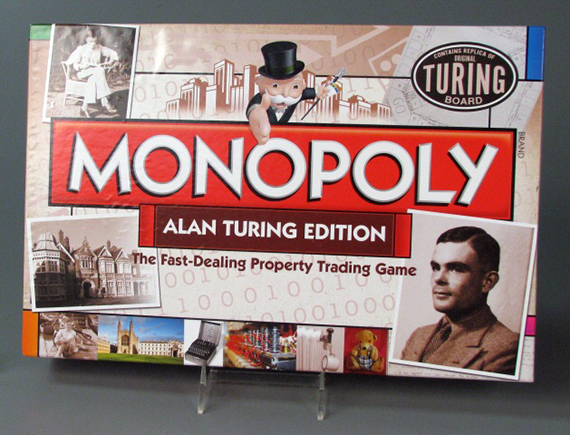 While serving as a codebreaker at the Bletchley Park mansion, now a museum devoted to the codebreakers, Turing heard about a Monopoly game board specially designed by William Newman, his mentor’s son. Handmade boards and games were more common during the years of the Great Depression and wartime. But Newman’s board incorporated local features and a special diagonal path through the middle. Turing raced to the Newman home to play the game but he lost to the much younger player. Newman recounted later how he’d played many other games, such as chess, against Turing. Turing always won—even when he played chess blindfolded, envisioning the moves in his head. But Monopoly’s dice were not so lucky for Turing that day. The 2012 Alan Turing Edition Monopoly game includes a small reproduction of William Newman’s game board as well as a transcript of his handwritten rules. The game itself incorporates many of the place names and details from William’s board, but it also carries other facts gleaned from milestones in Turing’s career and a narrative of historic details taken from his writings and interviews with his friends.

Games were important to Turing. Later in his career, he wrote a complete program for a computer to play chess, long before a computer with enough memory to run it existed. Clearly, he still enjoyed that game. I, for one, would love to visit the Bletchley Park museum to see if I can uncover more evidence of gaming in Turing’s archives. Bletchley Park’s website indicates that the museum no longer sells the Alan Turing Edition Monopoly, so I feel especially glad to have acquired an example for The Strong’s collection. Although the Turing Monopoly is not presently on view,  the game seems an unusually appropriate tribute to such an important historical figure.