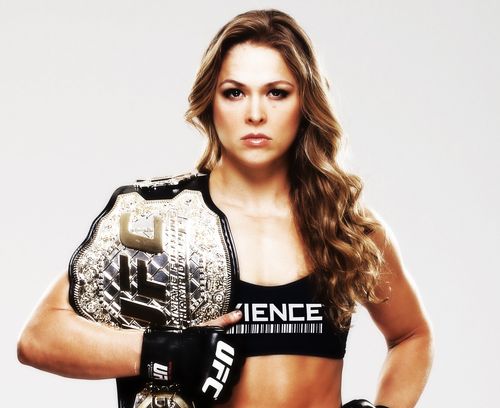 Ronda Rousey is a breakout star in the world of Ultimate Fighting.  She is also an emerging role model for women and girls.  By beating her last three opponents, Alexis Davis in 16 seconds by knock out, Cat Zingano in 14 seconds by submission and Beth Correia in 34 seconds by knock out she has vaulted to celebrity status.  And by the way, she’s beautiful.

She is also getting rich.  Her last fight was a pay per view hit and though the UFC does not disclose winnings, Fortune Magazine estimates her take at $5,000,000  from the Correia fight..  That is equal, according to the magazine, to what the male UFC stars rake in.

You would think there were lots of Ronda Rousey licensed merchandise in the marketplace.  Interestingly, a search of Toysrus.com, Walmart.com and Target.com for Ronda Rousey licensed toys and games came up with no matches.  In fact, other than videos, there was little in the way of licensed Rousey products in the major retailers.

Obviously, this represents an opportunity for those in all forms of play and children's entertainment.  But before you send an email or pick up the phone, think for a minute about some of the complexities of licensing a real woman who looks like a bulked up Barbie and commits mayhem in the ring.  Consider these questions:

Here are my thoughts.  Those who are most aware of Ms. Rousey are those who follow mixed martial arts, wrestling and boxing.  That means that these are males.  My guess is that the initial gateway to market will be gate keeper dads and end user boys.  Girls are going to like Rousey as well but the initial core audience will be male.

Where do Ronda Rousey products go in the store?  I think with like products.  In other words, she belongs right next to the MMA and Wrestling superstars on the action figure aisle.

What I think is going to be very interesting is to what degree girls engage the brand.  If they do, watch for more "girl’s" toys to start muscling their way into the “boys” department.