Tanya Thomspon of Mastermind Toys (then ThinkFun) introduced me to Elan at The Gathering for Gardner in March 2014. At the time, Elan was Chief Design Officer for Xbox Entertainment Studios and 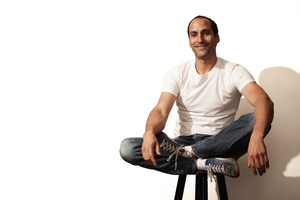 had quite an impressive list of accomplishments. Since that time, he co-created the Exploding Kittens card game with a goal to raise $10,000 to print 500 decks of cards, which was surpassed in 8 minutes, and it now tops the list for the most-funded game ever on Kickstarter. A phenomenal story!

Elan will be a keynote speaker at our Toy & Game Inventor Conferences and attending all our events this November. We’re looking forward to hearing his stories and advice firsthand. Tanya interviewed Elan for our newsletter and I'm sharing their interview here – it is a great read!

Tanya: Congratulations on the success of Exploding Kittens! I am a backer! For those who haven’t heard about it, it is the work of yourself and another game designer Shane Small, along with artist Matthew Inman of The Oatmeal. It's a card game for two to five players that has become the most successful gaming Kickstarter of all time, raising $8,782,571 from 219,382 backers. Tell me how it all started?

Exploding Kittens started when I was tinkering with a card game with Shane called “Bomb Squad”. The
basic game was a deck of cards placed face down between us, and we’d each take turns drawing cards until someone drew a joker (bomb) and was out of the game. It took a while for us to figure out the fun bit of the game, how to add strategy, and how to ensure that each card motivated players to interact with each other instead of purely interacting with the game. Eventually we got to a game we both really enjoyed, and I started playing it with some friend. By random chance I ended up in a room with the brilliant Matthew Inman of the Oatmeal, and he asked to see the game. We played our first game and afterwards he asked to play again. This went on for hours. Finally, he said “This game is amazing. You should let me illustrate the cards, but we have to change the name to something like ‘Exploding Kittens’ because…the internet.”

WERE YOU EXPECTING IT TO BE SUCH A SUCCESS? Our original goal was $10,000 to print up about 500 decks of cards. We hoped it would do better than that, but none of us expected what actually happened.

WHAT DO YOU THINK CAUSED IT TO GO VIRAL?

The easy answer to that is The Oatmeal. Matt has such a huge following, that simply posting to his social media accounts was the entirety of our initial marketing plan. However, four days after our initial surge, our numbers were dwindling, and we knew that we had tapped out The Oatmeal audience. We had to change our strategy. I decided to roll out the community building strategies I’d used for the last decade in building Alternate Reality Games. We pivoted to build a Kickstarter page that was 100% community focused including activities, live parties, charity events, and user generated content sprinkled over everything. The entire team worked around the clock for the next 25 days to host the largest party in Kickstarter history.

WHAT ADVICE TO YOU HAVE FOR OTHER DESIGNERS LOOKING AT PUTTING THEIR GAME ON KICKSTARTER?

Read everything you can from previous Kickstarter success and failures. Creators want to talk, and they do it A LOT. Read everything.

WHAT ARE SOME OF THE TRIALS YOU’VE EXPERIENCED WITH THIS SUCCESS?

After a Kickstarter campaign ends, most projects go dark for a while. We didn’t want to do that. The biggest trial has been discovering ways to work with our community to continue growing/creating while we print about 56 million pieces of paper.

NOW EXPLODING KITTENS IS NOT YOUR ONLY SUCCESS. TELL ME ABOUT SOME OF YOUR OTHER CAREER SUCCESSES?

I met you at the Gathering 4 Gardner in 2014. This is an invitation-only conference for math, magic and puzzle geeks honoring the incredible life’s work of Martin Gardner. You did a presentation about Edoc Laundry, a company designed to produce ARGs using clothes as the primary platform. Consumers deciphered codes hidden within garments and entered the results into the game's main website to reveal pieces of a story about the murder of a band manager. WHAT? Tell me more about this.

EDOC was a company that first and foremost made awesome clothes. Every shirt in the line was something we’d be proud to wear in public. But each item also had a secret code or hidden message embedded somewhere in the clothing. To find the code you had to interact with your clothes. You had to fold your shirt a certain way, or get it near another shirt, or get it hot, or cold, or wet. We used thermal inks, and infrared inks, and did all we could to fulfill the company motto, “our clothes tell secrets.” If you found the secret in your shirt, you could take it to our website and enter it in. When you did, a short 2 minute movie would start playing. We made a lot of movies…one for every shirt in the line. They all fit together like a puzzle, telling the story of a woman on the run from the law for a crime she didn’t commit, and how she desperately needs your help. Before you know it, you’re knee deep in a murder mystery story told through your clothing. Each movie ended on a cliffhanger, so if you wanted to find out what happens next…great! Buy another shirt.

IN ONE SENTENCE, WHO ARE YOU?

I tell really big stories for a living.

WHAT WAS YOUR FAVORITE TOY OR GAME AS A CHILD?

Riding my bike with my brother. My mom hated the notion of us sitting inside after school, so she would force us onto our bikes to have adventures for hours until it was time for dinner. We found wonderful things, build amazing contraptions, and ended up in the hospital a lot of times. My mom is crazy and awesome.

HOW TO YOU ACTIVATE CREATIVITY?

My brain is wired to my legs. As long as I’m walking, my brain gets the power it needs to operate. Otherwise, I’m a useless lump.

WHAT IS YOUR SUPERPOWER?

I can destroy boredom any place, with anyone, and with any materials.

WHAT ARE YOUR PASSIONS?

Building, and supporting others who build.

WHO IS OR HAS BEEN YOUR MENTOR? WHAT PIECE OF ADVICE DID S/HE GIVE YOU?

My mentor is Jordan Weisman. When I first started running my own companies and was having trouble brainstorming with larger teams, he told me, “Other people’s ideas are not worse than yours. They are just different than yours.” Changed my life.

WHAT IS YOUR PLACE OF INSPIRATION?

Any place I can be in/on/near/moving through water.

IF YOU COULD ONLY HAVE TWO TOOLS TO CREATE WITH ON A DESERT ISLAND, WHAT WOULD THEY BE?

A computer and Amazon Prime

WHEN IS BREAKING THE RULES OKAY?

That’s the exact opposite of the question you should be asking.

WHAT ADVICE CAN YOU GIVE INVENTORS PRESENTING IDEAS TO YOU?

Be confident, stop agreeing with me, and don’t be thrown when I do the same.

WHAT TRENDS DO YOU SEE IN GAMES?

There’s a lovely return to face to face games right now. I believe very strongly that games should not be entertaining in their own right, but should be the tools by which we entertain each other.

YOU ARE ALWAYS DOING SUCH AMAZING AND INNOVATIVE ADVENTURES! WHAT’S NEXT?

I’m going to be focusing on Exploding Kittens for at least another year while the company gets off the ground. We’re working on a TV show and a video game that are pretty amazing. After that, I’ll apply more heat to one of the other projects that’s been simmering for a while.