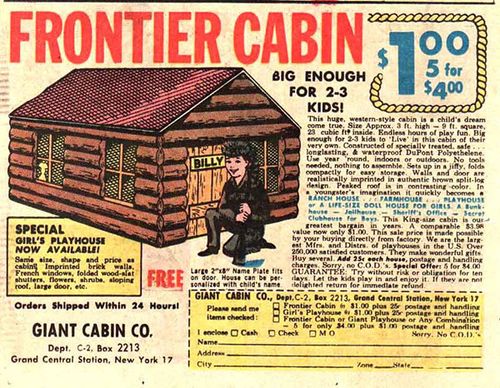 Billy is one lucky kid as are his parents, they just bought him what appears to be a sizable log cabin from the Giant Cabin Co. for $1.00.  It looks to me like this ad ran in comic books in the 1950s.  I base that on the price but mostly on the coonskin cap the boy is wearing which was a hallmark of that decade's Davy Crockett fad.  Interestingly, there is a girls' option (not shown) that comes with shrubs and French windows.

I am not sure of what happened to the Giant Cabin Co. but that $1.00 price (5 for $4.00) is pretty amazing when you realize that it would have sold for $8.49 in today's money. Why was it so cheap?   Perhaps it was because it was not what it appears to be.  Here is a comment made by a gentleman named Phil Lea who has a great website called "My Lost Toys."  He actually purchased one as a kid and here is his lament:

This was a big rip-off by GIANT CABIN CO. of NY (Maybe they're burning in Hell about now for ripping off us little kids.) I ordered this "cabin" and it was nothing but thin, stinky plastic that arrived in an envelope!!!

My Dad built a wooden frame for it in the yard and you draped the plastic over the frame.
(I think it was designed to drape over a card table, but we never owned a card table.)

Every once in a while, I'll be around some plastic that has that same odd smell this plastic did.