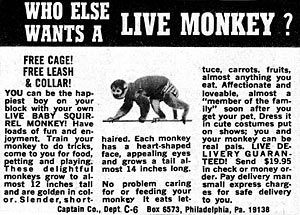 I have been doing some research on ads for toys that ran in comic books back in the mid-20th century.  I wanted to see what appealed to kids when their parents weren't looking and to try to understand if kids were simply more gullible back then.  I also wanted to see if marketing tactics were very different from now.

I was also intrigued by  subtle tactics like the headline that says "Who else wants a live monkey?" Implying, of course, that there were people throughout your town that currently have them.  Also, that the monkey can be your pal.  You can just see a child imagining that he or she is taking their monkey to school.

As I considered the offerings I was struck by how many were just plain weird and fun.  I am going to be featuring some like "X-Ray Glasses" and "The Invisible Helmet"  over the next few weeks.

For starters, though, I have to tell you  that this ad for a live monkey pal caused me to really take note. Did any of our more mature readers ever actually purchase a monkey through a comic book?  Did you ever dress it up in costumes and make it your pal?  And while we are at it can any of you answer these questions:

2.    If you could, how did you ship it?  Was there some kind of monkey delivery service available?

3.    The ad guarantees safe delivery but if your monkey showed up dead; how many years of therapy would you require?

5.    The ad suggests that you dress your monkey in cute costumes and put on shows.  Did you have to make your own monkey costumes?  Would your monkey cease to be your "pal" if he or she (gender was not indicated) did not like the clothing selection or the show you chose to put on?