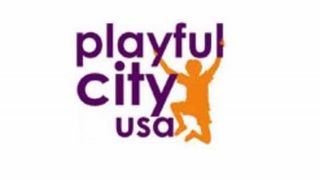 Our friends at KaBOOM have spent the last almost 20 years making the world a more playful place, particularly for kids.  They have "built, improved or improved" an amazing 16,300 playgrounds in that time.

KaBOOM is more than about playgrounds and that is why they started the Playful Cities USA program that honors cities that have worked to make their communities a playful place to live.  Things like hopscotch sidewalks, adequate recess at schools and play days are just some of the elements that make a city playful. None of that happens unless a community's leadership chooses to make their community a better place to live.  241 communities have made this year's list.  Did your city make it?  To find out, click here.

As impressed as I was by those who made the list, I was equally intrigued by those who did not.  I reviewed it and found that there were whole states with no Playful Cities:  Alaska, Arkansas, Delaware, Hawaii, Oregon, Utah, Vermont and Wyoming have no Playful Cities.  I find it interesting that what most of  states have in common is that they are blessed with nature's tools of play (waves, mountains, etc.).  Perhaps if play is ambient there is no perceived need to create it.

I was also surprised by some of the cities that were missing from the list.

In California, San Francisco made the list but Los Angeles did not.  In Missouri, both Saint Louis and Kansas City were missing. Pittsburgh made it but Philadelphia didn't.  Dallas is a Playful City but not Houston.

If your city did not make it and you wonder what it needs to do, check out the Playful City USA / KaBOOM website.  If your city did make it, you may want to let your community's leadership know.