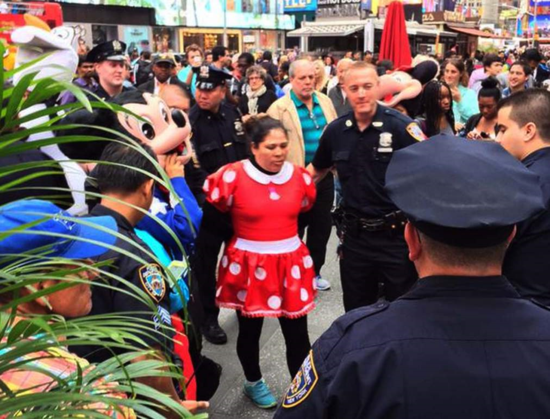 Have you been to Times Square in the last couple of years?  It's a bit like Sodom and / or Gomorrah (take your pick).  There are topless women wearing only paint; there are hucksters of every variety and there are costumed cartoon characters; tons of them.

Every once in a while the characters go a little crazy and get into fights; curse tourists and push little kids. Alas, Minnie Mouse and Hello Kitty took their head off and got into it over a little too much competition for tips thus giving a whole new meaning to the phrase "losing your head."  I cannot imagine what a six year old must think watching two beloved characters knock the crap out of each other.

Needless to say, it's bad for kids and families and its bad for everyone in the toy, play and entertainment industries.  The characters have banded together to do self-policing but it obviously isn't working.

Costumed cartoon characters are protected under Freedom of Speech.  Still,  it sure seems like there needs to be some kind of background checks on these people and more policing.