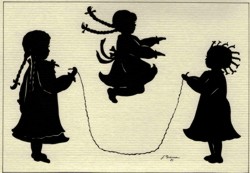 Cinderella, dressed in yella
went upstairs to kiss her fella
made a mistake, kissed a snake
how many stitches did it take?
1, 2, 3,…

Jumping rope was, at least when I was a 6-year-old boy, a thing that girls mastered with an ease that still mystifies me.   Particularly what astounded was their ability to do the dreaded "Hot Pepper." There I would be, in a line with other little kids, waiting my turn as the two big girls, one at each end, turned the rope. They would, at first, turn it at an easy pace, allowing a naive boy  (me) to think that he had mastered the form…until….”HOT PEPPER!”

Yes, “Hot Pepper,” that moment when the rope would move immediately from an easy pace “Mable, Mable, Set the table…” to supersonic speed, causing the rope to smack into your head or tangle up your feet, causing embarrassment and bruises.   Jump rope rhymes were so deceptive.

I was thinking about chants, rhymes, sidewalk songs or whatever you want to call them when it occurred to me that they might be an endangered species.  Think about it, school recess is down to 15 minutes a day and children no longer play alone on the sidewalk.  When do they have time to use, much less pass down, sometimes century old rhymes.

So, if older children no longer teach the chants to younger ones will the chants end up being stale rhymes in musty books or in odd parts of the Internet?  It would be sad if the death of the chant were to be a side effect of too little time to play and too much parenting. It would be nice if the various toy and play industries took up causes like preserving sidewalk chants from extinction by advocating for more play time for kids in school and at home.

Below are some rhymes and, at the end, some websites where you can find more.  If you have a favorite rhyme or were really good at “Hot Pepper” let us know.

and check out these websites for more rhymes: