As we explore in our "The Impact of Demographics and Income on Toys Spending" global briefing, although the world's child population has been declining, this will be a short-lived phenomenon. The trend towards smaller families in many markets ties in with other cultural and income shifts that actually stand the global toys market in good stead. Our briefing analyses two key determinants of demand -demographic and income trends – to understand their impact on toys sales in the future. 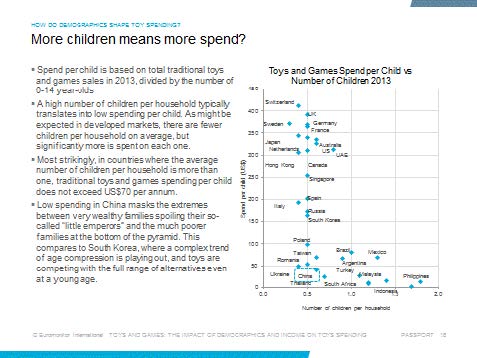 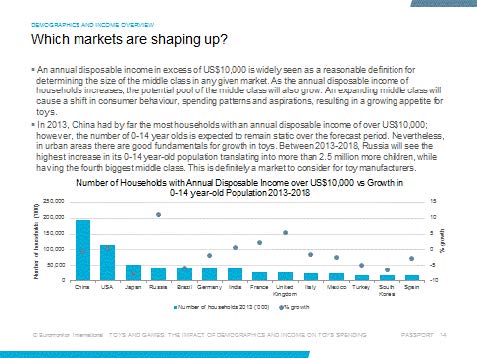 In absolute terms, Asia Pacific and Africa and Middle East have the largest 0-14 yearold
populations. Conversely they also have relatively low spend per child.

China has by far the most households with an annual disposable income of over
US$10,000; however, the number of 0-14 year olds is expected to remain static over
2013-2018. This suggests good fundamentals for toys growth particularly in urban
areas. Between 2013-2018, Russia will record the highest increase in its 0-14 year-old
population, translating into more than 2.5 million more children, while having the fourth
biggest middle class.

Spend per child vs number of children per household

In countries where the average number of children per household is above one,
spending on traditional toys and games per child does not exceed US$70 in a given
year.

Overall, the older the average age of women at childbirth, the higher the spend on
traditional toys and games per child. As modern mothers continue to work, for various
reasons, the limits on parental time require products that can fill this gap. In almost all
countries where the average age of women at birth is high, spend per child on
traditional toys and games exceeded US$320 in 2013.