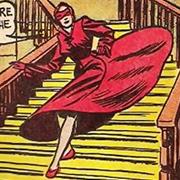 According to the website, listchallenges.com, there are 616 comic book characters that are not published by Marvel or DC.  That's a lot of intellectual property that could be mined for toys, games, movies, apps, video games and more.  You may well be familiar with some of them like Zippy the Pinhead, Astro Boy and Archie Andrews to name a few.  It is the ones that were new to me that I found anywhere from funny to bizarre to compelling.  What really attracted me, however, was the artwork.  Here are my favorites.  If you want to review the complete list, you can do so by clicking here.

The Woman in Red (see above) is now in the public domain.  Love the way the artist created a bigger presence for the character by the color and the way the dress swirls out and takes up space.

She was a policewoman who was frustrated with her job and took on this secret identity. She first appeared in 1940 but recently had an appearance in a movie as late as 2010:  Avenging Force; the Scarab. 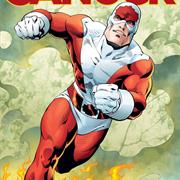 Captain Canuck is a superhero from, of course, Canada!  He first appeared in 1975, set in a future 1993 in which Canada is the most powerful country in the world.  The Captain is still very much around and has been featured in a web series and comic books.  The current publisher is Chapter House Books.  Love the costume. 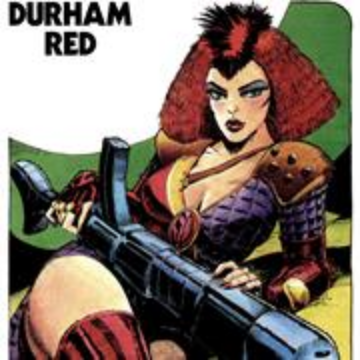 What I like about Durham Red is she looks like she could be spotted walking around lower Manhattan. She is a bounty hunter with a little bit of vampire in her.  Durham Red is published by Rebellion Publishing. 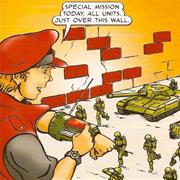 General Jumbo was introduced in 1953 by the UK comic book, The Beano which is still published by D.C. Thomson & Co.  It features a 12 year old boy who is in command, via remote control, of a miniature army.  What a great concept for a line of toys.

There are plenty more so take your time and work your way through.  It's fun and you may come up with a big idea.