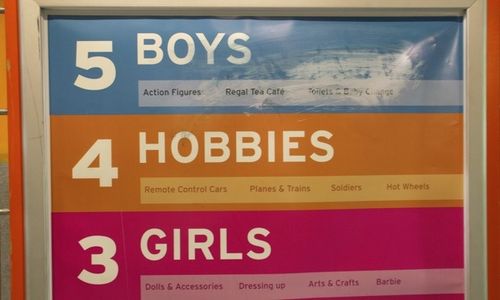 I find it really intriguing to see what comes next when large companies make socially oriented changes.  Due to their sheer scale, these big businesses have the ability to create a ripple effect.  I think that is what we are going to see as a reaction to Amazon’s decision to end gender designations for toys.

As Caroline Bologna pointed out in her Huffington Post article, “Amazon Removes Boys and Girls from Toy Categories”: “…if you look at the category sidebar on the Toys & Games section of Amazon, you'll notice that the option to sort toys by gender is no longer there — while a cached view of the site shows it previously included "boys" and "girls."  Bologna goes on to point out that gender designations still pop up in some parts of the site but it is believed that they will eventually be eliminated as well.

In February, Wal-Mart increased its minimum wage to $9 per hour for full-time employees.  In March, Target matched the increase as did TJ Maxx and Marshall’s.

I checked toysrus.com; target.com and walmart.com to see their status and all three still allow you to search by gender.  Will retailers follow Amazon’s lead?  I think it’s a reasonable bet.

What do you think of Amazon’s decision?

For more on this subject see:

"…and the Gender Walls Came Tumbling Down; Harrods Department Store Mixes Up the Toys"

Thanks to the worlds best sons, Matt Gottlieb and Andrew Gottlieb, for bringing this article to my attention.