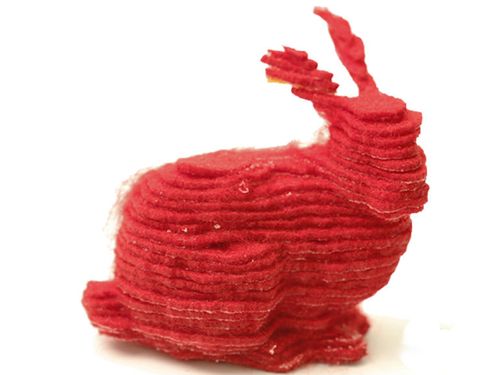 We present a new type of 3D printer that can form precise, but soft and deformable 3D objects from layers of off-the-shelf fabric. Our printer employs an approach where a sheet of fabric forms each layer of a 3D object.

You have to hand it to The Walt Disney Company; they are never afraid or complaisant.  Rather than ignoring 3D Printing, they are taking it a step further.  Disney has employed its Disney Research global network of research labs to study the challenge of producing a 3D printer that can print out molded fabric (click here for the press release).  They have, according to their announcement, “A Layered Fabric 3D Printer for Soft Interactive Objects,” succeeded in creating a prototype that produces soft and cuddly objects.

"Cuddly"; take a moment and think about that word.  Cuddly toys make you think of soft, plush animals.  Is that where 3D Printing, or at least the Walt Disney Company, is headed? If so, it could allow a reimagining of the Build-A Bear business model of in-store manufacturing.  Even potentially more significant, it could move it into the home.  If that is the case, 3D printing is not just a potential game changer for traditional mold based manufacturing but for cut and sew as well.

With Mattel and The Walt Disney Company embracing new forms of production and interaction, we could be on the cusp of an era in which molds and container ship give way to computer stations and printers.  When the big guys move in a direction, it pays to pay attention.