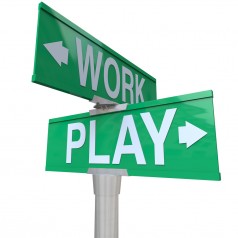 This is the second in a series of three articles by Francis Cholle about the importance of play in the workplace.  (For part 1 see "How to convince your boss that we all need play at work").  Mr. Cholle is an international business consultant, best-selling author, and engaging speaker. He helps companies rethink business in ways that conventional strategic management cannot. His clients include global powerhouses across a wide variety of  industries such as beauty, food, luxury, pharmaceuticals, communications, media, and information technology. His extensive studies and experiences in cognitive science, the performing arts, and eastern philosophies have profoundly influenced his consulting practice and approach to working with CEOs and senior executives. In his most recent book, The Intuitive Compass (Wiley-Joss, 2011) Mr. Cholle details his groundbreaking perspective on decision-making and describes how he has helped clients reach unparalleled levels of achievement in their industries.

Play opens us up to the possibility that we don’t need more of anything—time, money, knowledge, and so on—in order to produce more.  It is a radical idea, especially in business, where we often hear the argument the budgets are limited and therefore the ability to innovate is limited.  How can you get the same result with half of the resources?  How is that possible?

It’s possible because human motivation is not linear; the way one person gets motivated is a complex function of many intertwined factors, which do not follow a linear continuum, but which can be greatly influenced by play.  When we tap into the part of people the responds to play and inspiration, we unleash possibilities and huge potential for new sources of motivation that we could not have predicated or accessed otherwise.  Thus, when people are engaged in play, truly and deeply engaged, they lose track of time, they stop thinking about whether their paycheck is bigger today than it was yesterday, they form close and fruitful bonds with their playmates, they withstand discomfort and inconvenience, and more often than you might imagine, they create magic.

Play moves people into an optimistic frame of mind, a place where they are more adaptable to change and more likely to improvise, and where they begin to dance in the groove of life.  In that joyous groove, success and innovation become far more likely outcomes than they ever could be in an atmosphere of grinding unhappiness and perceived lack.

Take, for instance, a story of how dice games were invented, according to the ancient Greek historian Herodotus.  In pre-Roman times, 2,500 year ago, the kingdom in Arabia was suffering a famine that left it only able to feed half of its citizens.  The Arabian king invented a game—sheep knuckle dice—and established a policy that every other day, every person in the kingdom, would do nothing but play sheep knuckle dice.  They would not work, they would not just hang out, and they would not run errands for their grandma.  And they would not eat.  Such was the level of immersion the sheep knuckle dice provided that the people managed to survive an eighteen-year famine.

What does this tale reveal to us? It shows that the impact of play reaches far beyond the realm of reason.  It also tells us that the power of play is such that it can provide an effective distraction even from something as elemental as hunger.  Play is a strong catalyst for changing behavior, helping people shift perspective and refocus their energy to overcome hardship or challenging situations without necessarily increasing material resources or the number of team members.