I am a self-professed nerd. I blame (or should I say credit?) my parents, whose family vacation plans alternated visits to educational destinations such as Colonial Williamsburg, Gettysburg, and Washington, DC (No cruises to Aruba or trips to ski resorts for us, thanks. One spring break, my dad took my two brothers and me to a coal mine.) I devoured stacks of books from our town library each week—after completing my homework, of course. My school’s honors program generated plenty of extracurricular activities to keep our buzzing teenage minds occupied. I regularly skipped study hall or stayed after school to rehearse for mock trial, build a papier-mâché castle, or participate in a SimCity competition. Outside of the honors program, though, I tried to stifle my eagerness to skip ahead in our history textbooks and griped along with my classmates about difficult French assignments. I had watched enough ‘90s sitcoms to realize that being a nerd wasn’t “cool” and that I should attempt to blend in. 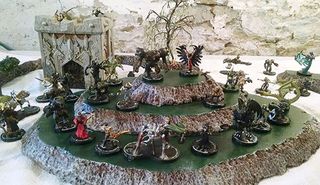 My younger brother Bob, however, had no such qualms; he embraced his own kind of nerdom, freely advertising his hobbies of fencing, partaking in Civil War reenactments, and playing Mage Knight (a collectible miniatures wargame). Bob crafted elaborate tablescapes for Mage Knight, deliberately positioning the tiny figurines on moss-covered rocks or under tiny trees. This miniatures wargame utilized figures called “warriors” which had pre-assigned points and statistics, eliminating the need for in-game reference books. Bob became so adept at combating enemy armies that he competed in—and occasionally won—Mage Knight tournaments in the Pittsburgh area. By the time I left for college, Bob had moved on to playing Dungeons & Dragons (D&D) with his gamer friends.

Up until last year, my own familiarity with D&D, or any other role-playing games (RPGs), had been almost nonexistent. (I knew there was a Dungeon Master and that characters included elves, trolls, and maybe wizards… also players needed 20-sided dice?) Basically, television shows had informed my perception of these games as a cult hobby for basement-dwelling super-nerds. That changed when The Strong acquired the physical holdings of the Play Generated Map and Document Archive, or PlaGMaDA.

The mission of PlaGMaDA is “to preserve, present, and interpret play generated cultural artifacts, namely manuscripts and drawings created to communicate a shared imaginative space.” Since 2008, PlaGMaDA has collected ephemera created as a result of play. According to founder Tim Hutchings, “any mark made for or during game play is fair game.” Hutchings feels these living maps and documents share characteristics with folk and outsider art. Typically, players disposed of these papers after completing specific role-playing game adventures (or after giving up gaming), resulting in a scarcity of this type of supporting documentation. Game mapping, once considered a valuable skill in the role-playing game world, fizzled due to the “auto-mapping” features of computer games and later fantasy games. Hutchings’ project seeks to preserve this type of ephemera not only for its aesthetic value, but also the evidence of game play and development captured by this documentation. Within the PlaGMaDA papers here at The Strong are hand-drawn maps, notes, sketches, character sheets, rules, game modules (both published and manuscript), reference materials, convention information, and other documentation created by numerous players of assorted role-playing games. (PlaGMaDA scanned the majority of these documents for display on its website.) The original documents are a sight to behold. The carefully hand-drawn maps and handwritten game modules, especially, showcase the creativity and dedication of these gamers. It’s also surprising that these pages survived—how many of us saved the pieces of scratch paper on which we kept score for Scrabble or Yahtzee?

While processing this collection, I learned that one doesn’t simply “play” Dungeons & Dragons as you would a board game. The only items required to partake in D&D are the rulebooks, a character sheet for each player, and some multi-sided dice. Beyond that, there are optional accessories, such as miniature figures, gridded battle-mats, and expansion packs. Players embark on an adventure together, utilizing each character’s special attributes to combat monsters, solve problems, and gather treasures. The Dungeon Master serves as both storyteller and referee, guiding the players and describing the outcomes of their decisions. Game companies sell published wargaming modules, which introduce established adventures for players to execute. But the driving force behind the success of role-playing games such as D&D is the imagination and passion of the players. So why is the pop culture stereotype of RPGs and their gamers still pejorative? What’s wrong with gathering with friends, telling stories, and going on an adventure as a sorcerer for an hour? Is it that much different, for instance, than assuming the character of Miss Scarlett in a game of Clue? Since our society values creativity and originality, maybe it’s time for tabletop RPGs to become mainstream. So Bob, please consider this my public apology if I ever scoffed at your game play. And anyone looking to learn more about role-playing games can visit The Strong—you can view the earliest existing version of D&D on display in Game Time!—or contact our staff in the Brian Sutton-Smith Library and Archives of Play. (Nerds welcome!)