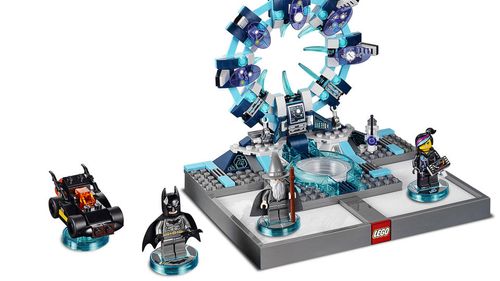 The LEGO Group has announced that it will enter the lucrative, fast-growing toys-to-life market with its LEGO Dimensions product line. Players would start by constructing an NFC-enabled portal; placing compatible characters and vehicles onto it unlocks them in a multi-platform video game. The video game, portal, and 3 characters are purchased in a starter pack expected to arrive in late September, with additional content and toys coming in subsequent releases. While rival entries into the category have been successful they revolve around a very linear experience where players purchase game characters represented by real-life figurines. The appeal of LEGO is the ability to throw away the instruction manual and building unique creations; replicating this experience in the virtual world would make LEGO Dimensions an offer kids and parents alike can’t resist.

Although bought as tangible real life objects toys-to-life are only as interesting and compelling as the virtual universe they are played in. LEGO Dimensions is being developed in a partnership with Warner Brothers and players will be playing though content from DC Comics, The Lord of the Rings, The Wizard of Oz, and Back to the Future. All this blended together similarly to the plot of the LEGO Movie makes for an experience that caters to a wide audience. Game play also involves player-assembled vehicles, and even though these will initially be very simple and lack customization options it still provides a far less linear game experience than competing offerings. This is bound to make LEGO Dimensions one of the sought after toys in the upcoming winter holiday season.

The popularity of open-ended, non-linear games like Minecraft and increasing demand for traditional construction as well as educational toys has shown that the future of toys to life lies in experiences that emphasise creativity, freedom, and seamlessly blend real-life play with interactive virtual experiences. LEGO construction sets thrive by offering players content diversity and freedom not found anywhere else. The challenge is taking this into the virtual world, and the LEGO Dimensions portal is the key to this. Initially this will be a simple NFC reader that imports content into games by reading information from a chip inside figurines and vehicles. This technology is currently the industry standard when it comes to toys-to-life, but it makes vehicle building and design extraneous to the playing experience, and this is LEGO’s core appeal.

Over the long term the company needs to work towards making the portal into a toy-to-life platform that allows users to build highly-customizable real-life LEGO creations and use them in virtual environments. 3D scanning technology like Intel Corp’s RealSense cameras necessary to achieve this already exists and is becoming increasingly affordable. Ideally the portal would become akin to a video game console that uses player-built LEGO creations as input opening up revenue streams from construction kits, software titles, subscription fees and other content. But to create this new ecosystem LEGO Group needs to build a compelling virtual universe and LEGO Dimensions looks to be an important foundation for this.