The National Toy Hall of Fame at The Strong inducted Scrabble in 2004. Since then we’ve made efforts to collect many different versions of the famous “scrambled word game.”

Visit The Strong’s National Toy Hall of Fame web page for Scrabble, and you’ll learn that unemployed architect Alfred M. Butts invented the game during the Great Depression. Butts first called his game Lexico, and later Criss Cross. The Strong holds one of very few known copies of the Criss Cross game board. Butts employed a blueprint method and then glued the paper print onto cardboard. Any player will note the similarity to today’s Scrabble board. Butts—who retained his patent and earned royalties on every set sold afterwards—sold the production rights to James Brunot, who tweaked the rules and changed the name to Scrabble. Sales dribbled along until the president of Macy’s discovered the game in 1952. Other stores quickly followed and by 1953 Brunot couldn’t produce enough games to satisfy the demand. Scrabble has sold steadily ever since. 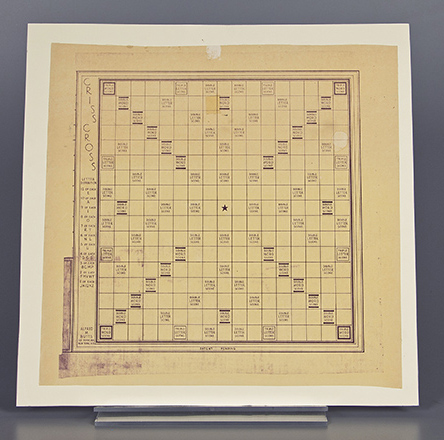 What is the newest Scrabble story? Merriam-Webster released the revised Official SCRABBLE Players Dictionary in August this year, amid controversies over new words. This Fifth Edition marks the dictionary’s first major update in nearly 10 years. The list of now-legal words includes GEOCACHE, the first word chosen by Scrabble fans during a Scrabble Word Showdown event. Other newcomers include CHILLAX, FRENEMY, HASHTAG, and TEXTER, to name only a few. “With thousands of new words, this edition will boost scores for players of all levels,” said John Chew, co-president of the North American Scrabble Players Association (NASPA). “Tell your opponent how your letters make you feel with AIYEE, MEH, OOF, or YESSIREE, or show off your GAMEPLAY by scoring 401 points for QUINZEE!” artist John Kahn’s World’s Largest Scrabble Game sculpture. Known for whimsical mobiles and feats of engineering and architecture, Kahn first imagined the giant, nearly eight-foot-square game as a Pop-art project.But he couldn’t devise a way for the tiles to cling to the wall-hung board. Hidden magnets finally made this possible, and Kahn completed nine of the giant games, some of which sold through the mail-order retailer Hammacher Schlemmer. Kahn and friends visited The Strong to personally deliver and autograph the giant game.

According to manufacturer Hasbro, Scrabble sells millions of standard versions each year in the United States alone. But Hasbro also licenses my nomination for the smallest Scrabble, the wildly popular Internet version available through Facebook and on both IOS and Android devices. Although I play the game once in a while, I asked a friend who’s played the game for years—and who asked for anonymity—just how much he plays it. He told me he plays the mobile version daily. “I usually have about three games going at a time,” he said. “I start my day by checking my games and take my turn. I usually get in a few words before the end of the day. The weekend is another story. Sometimes friends and I will power through a game or two in a day.”

Of course, Hasbro’s online game must compete with dozens of Scrabble imitators, from Facebook’s simpler Words With Friends to its Lexulous—just different enough from Scrabble to avoid a lawsuit.In a related note, scholars at The Strong’s International Center for the History of Electonic Games are currently researching how best to document and collect online games. Unlike traditional board games and even electronic games stored on some kind of physical media, these exist only on the internet—they were “born digital.”

These examples and others in the museum’s collection help The Strong demonstrate the ongoing popularity of Scrabble as well as the ways it has facilitated our play over the years. What is your favorite Scrabble game story?