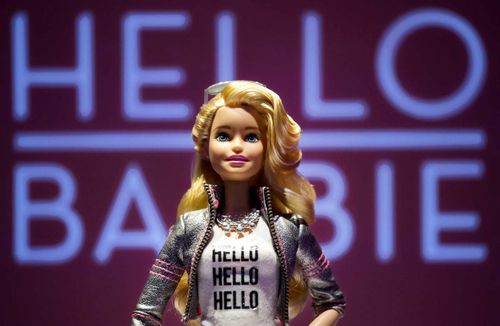 “It was probably inevitable that the so-called Internet of Things — those Web-connected thermostats and bathroom scales and coffee makers and whatnot — would beget the Internet of Toys.”

Natasha Singer, “A Wi-Fi Barbie Doll with the Soul of Siri,” The New York Times

Despite some grumbling about privacy, I predict that “Hello Barbie,” Mattel’s answer to “the internet of things,” is going to be a major breakthrough play pattern.  Why, because it taps into a child’s powerful need for an imaginary friend.

I can remember talking to my imaginary friend and I bet many of you can as well.  An imaginary friend was whom we played with when no one else was around or whom we talked to when we were lonely.  In fact, I sometimes wonder if the imaginary friend never really leaves.  Maybe it is that voice that tells you to “Go with your heart; go with your gut or just go.”

For those not familiar with Barbie's latest manifestation; "Hello Barbie" not only interacts conversationally but learns a child's interests.  The result is an imaginary friend manifested as Barbie.

It is interesting that those who criticize Mattel for lacking vision may be overlooking what could potentially be not just a new toy but also the birth of the convergence of fantasy and the physical world (should we call it phantasy?).

Congratulations to Oren Jacob and Toy Talk who created the technology and hats off to Mattel for adapting it.  Keep an eye on “Hello Barbie,” it could be the beginning of something very important for those in the business of toys and play.