Nintendo has just announced a new partnership with Tokyo-based mobile gaming and e-commerce company DeNA to develop game apps for smart devices featuring its iconic characters including Mario and Donkey Kong. As part of the deal, Nintendo will buy around 10% stake in the mobile gaming company marking a major shift in its global strategy.

As Euromonitor International highlighted in its latest Nintendo Global Company Profile last month, Nintendo's strategy of software exclusivity has been undermined by the rise of mobile gaming on smartphones and tablets, and ongoing technological improvements to these devices, especially as casual gamers form a core consumer group for the company. In the same profile, Euromonitor International rightly advised Nintendo to look at ways to leverage the strength of its games portfolio to develop apps for mobile devices. 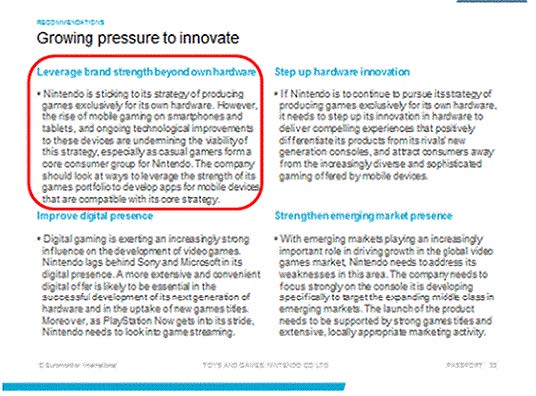 Based in Kyoto, Japan, Nintendo is the world's leading video games company. However, the key player has witnessed its global value sales fall in recent years and this is despite the 2012 release of its next generation static video game console, WiiU. WiiU faces significant challenges as Sony and Microsoft's new consoles are changing consumer perceptions of consoles both in terms of the gaming experience and their wider role in home entertainment.

Furthermore, the hand-held video game consoles category, in which Nintendo remains dominant, is increasingly seeing its position undermined by mobile games, which is seeing strong growth driven by the proliferation of tablets and smartphones, and improvements to the gaming experiences on such devices. Nintendo has long pursued a strategy of allowing its games to be played only on its own hardware platforms. This strategy risks falling out of step with the times, as smartphones and tablets expand the range of opportunities for games and undermine demand for hand-held consoles in developed and emerging markets alike. Its new partnership with DeNA is addressing this issue.

The global video games market will continue to be shaped by the rapid expansion of digital gaming during the 2013-2018 period. The ongoing proliferation of tablets and smartphones and improved gaming experiences on those devices are set to drive a 10% CAGR in mobile games. Moreover, the enhanced internet capabilities of the new generation of static video game consoles is expected to play an important part in making PC and console game downloads the most dynamic video games category globally over the forecast period, with a 17% CAGR.

Founded in 1999, DeNA's current portfolio includes well-known titles such as Marvel: War of Heroes, Star Wars: Galactic Defence as well as Transformers: Battle Tactics and the company has already been in collaboration with Disney since 2012. There is no doubt that the new partnership will benefit both parties; while DeNA expands its roster with Nintendo's iconic brands, Nintendo will have DeNA's extensive expertise on board in moving into new gaming platforms.