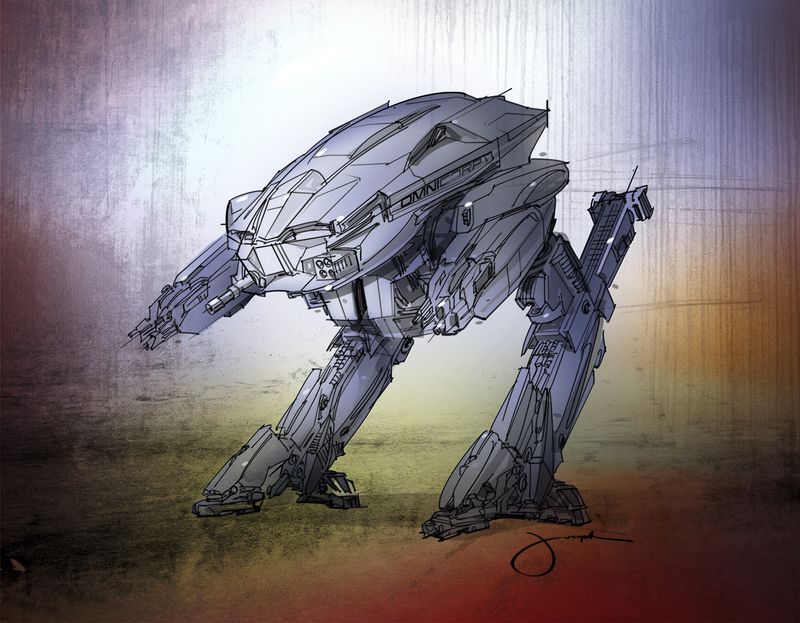 Adding a background to digital concept art doesn’t have to be complicated—simple forms, tonal values and color can indicate an emotional environment without adding distracting detail.

The image featured in this post is the third stage of a class demo showcasing digital marker tools in Photoshop CC. The simple background adds just enough intensity and emotional impact to create a mood without significantly taking away from the features of the articulated drawing.

The outline defining the robot remains intact so modelers can get all of the information they need from this sketch, but the piece itself has been brought to a more refined level of visualization without using a great amount of detail.

This sketch can be used for presenting art, informational drawings for modelers and sculptors, or as an under painting for a very refined, fully painted image with no outlines—a more photo-realistic look. For this post, however, the focus is on creating high-end concept art with emotional impact within a streamlined process. This will give you a very articulated design sketch that can be used for many purposes.

I remember an artist was upset at Disney because the team was using digital pencils instead of conventional. In fact, he was so upset his lower lip was quivering. The VP sat him down and calmly explained that no child ever refused to buy a movie ticket or a brand new shiny toy because the concept art was done digitally.

The guy really wasn’t upset about the aesthetics; he just didn’t want to take the time to learn the new tools. The point in our business is to make a profit. Well, at least most companies want to make a profit, so if that is on your list of to do’s, being an early adopter to technical innovations just may be a wise decision in the long run. Just say’n.