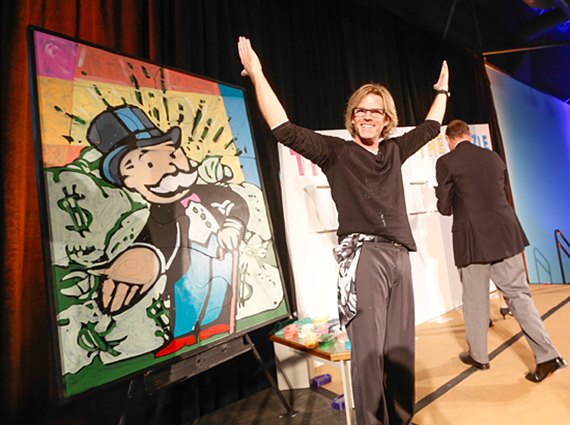 During our training, conservators usually specialize in a specific type of material, such as paper or paintings. As we become professionals, we find ourselves in institutions with diverse collections which requires broad conservation knowledge for all of the artifacts under our care, not just those comprised of our favorite material. Nowhere is this truer than at The Strong, where the museum’s collections range from paper dollhouse furniture to Barbie dolls to coin-operated arcade machines. The conservation challenges presented by this wide-ranging collection force me to think outside of the box every single day.

This was true when I was tasked with finding a way to safely mount and display “Mr. Monopoly.” The unique painting, which is in the form of an oversized jigsaw puzzle, was created by artist Eric Waugh during a performance at The Strong’s 2014 Play Ball. Mr. Waugh wowed the crowd by painting each of the puzzle pieces, which were mounted individually to the wall with Velcro, out of order. At the end, he assembled the pieces to reveal a stunning portrayal of everyone’s favorite capitalist, Mr. Monopoly. The painting was later auctioned off and generously donated to the museum by the auction winner. Though everyone was excited, we also recognized that the unusual format would present a few challenges. Why not just stick it in a frame and hang it, you ask? Well, it’s a lot more complicated than that.

You can’t just stick it in a frame. Simply assembling the puzzle and adding a piece of glass to the frame seems like the simplest approach, but there are a few reasons why this might not work. To create this painting, the artist used acrylic paint on a hard, Masonite-like pressboard. Because materials like Masonite are formed under pressure, they can warp or expand slightly over time as they acclimate to new environments. The brand new puzzle pieces may fit together now, but they might change over time, causing the joins between pieces to buckle and potentially send the whole painting tumbling down inside of its frame.

Okay, how about pressing the pieces into the frame with glass? Placing a piece of glass, or “glazing,” directly onto the surface of the pieces to keep them from buckling is a tempting idea. As a general rule, however, conservators do not like to have surfaces directly in contact with glazing. There are several reasons for this, not least of which is the concern that the surface of the painting (or drawing, or print, or photograph) may become stuck to the glass over time. This can cause significant damage should the artwork ever need to be removed from the frame.

What about that Velcro? Four small pieces of self-adhesive Velcro remain on the back of each puzzle piece. Though I did consider using the Velcro as a mounting solution, concerns over the material’s strength and longevity ruled it out. The original Velcro pieces were left in place as evidence of the object’s history, but were not used as a mounting solution. Can we just glue the pieces into the frame? This was not an option for three reasons. First, part of the fun of this painting is the fact that it is composed of puzzle pieces that were painted separately. Gluing them all together would result in a loss of that element. Second, the frame that came with the painting actually holds a second painting by Mr. Waugh, which depicts Mr. Potato Head. Because the “backing board” in the frame is also the reverse side of the second painting, gluing the pieces into the frame would permanently join the two paintings, eliminating any future opportunity to display them side by side. Third, gluing the pieces to the frame disregards a common principle of conservation, which is the idea that any modifications that we make to an artifact be easily reversible in the future.

This is exhausting. What can we do? Just when it seems that all hope is lost, I can usually count on my colleagues in the conservation community to come through with a unique and creative solution. Conservators have been using magnets for a while now to mount oversized textiles and works of art, position and repair sculptures and architectural features, and for other conservation tasks. If I could find a reversible way to attach magnets to the individual puzzle pieces, we could mount the painting as a whole while keeping the pieces (and the two paintings) separate.

Great! Let’s get some magnets and superglue! Whoa, not so fast. Now that I knew where I wanted to go, I had a little more work to do before I could get there. Stay tuned for my next blog post to find out how I found the best “magnet method” to mount “Mr. Monopoly.”

For more on toys, games, and all sorts of other stuff for play– past and present– from Carrie and her museum colleagues, visit The Strong's Play Stuff Blog.

For more on toys, games, and all sorts of other stuff for play—past and present—from Carrie and her museum colleagues, visit The Strong's Play Stuff blog. – See more at: http://www.globaltoynews.com/2014/11/the-world-series-of-shopping-the-black-friday-game-plan.html#more