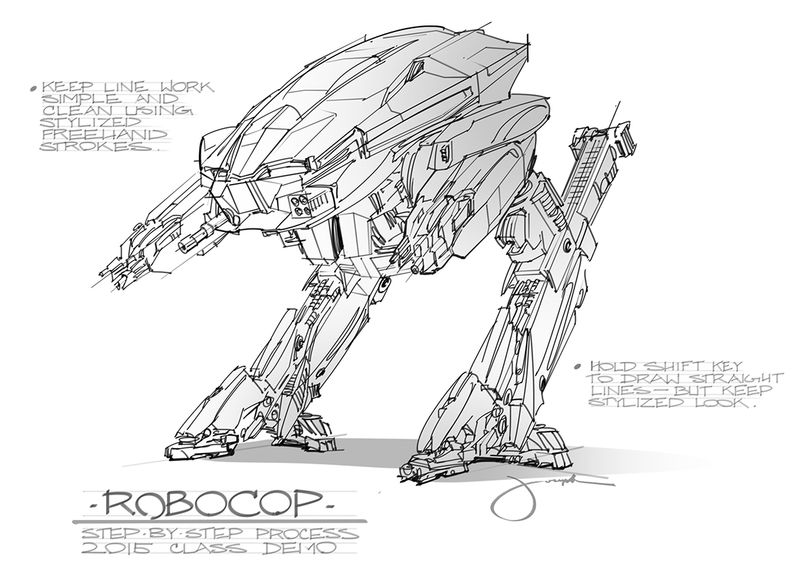 This post focuses on creating concept sketches using the latest technology available to speed the process and reduce repetitive tasks. The key thought, in terms of visual design, is to keep the sketch simple—edit everything down to the most essential.

My digital marker is a step-by-step class demo teaching stylized freehand sketching, and as we continue to add very simple shadow gradients, this drawing appears more refined and detailed than what it really is.

A dynamic freehand style will give your ideation sketches much more life than a finished (academic) drawing so perfectly articulated that it lacks emotional impact. Selling a design idea using engineering specs, especially in the toy industry, is a very challenging task. Concept art that has an emotional connection with the viewer is more important at this stage of the game.

Every industry has a standard regarding the style of creative ideation sketches, with the toy industry, primarily using pencil outlines with digital color added. This is a modern version of the very popular pencil with airbrush style that emerged in the late seventies and continued through to the late eighties.

The artists and designers in Los Angeles, primarily in industrial design, built upon the traditional marker style featuring the look and feel of stylized freehand line work. They used straight edges and French curves, but the overall look was not technically “finished” allowing for more emotionally dynamic line work—faster too. This freehand stylization gradually influenced feature film and gaming companies through such visual development designers as Syd Mead, who worked in multiple industries and disciplines. I must say he has influenced me as well. Some of his design sketches for production models and toy executions are nothing short of inspiring.

Demands of the fast paced modern global markets have taken many of these traditional tools and styles into the digital age, not only to speed the process but also update the look with more innovative technology.

Part 2 of this article will bring my humble sketch to the next level, as we discuss the need for continued innovation in design and digital workflow.