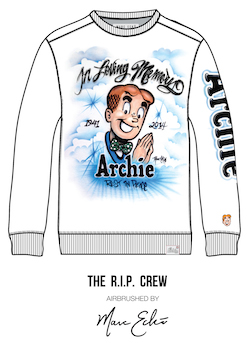 I like to check in with Archie Comics every so often because it demonstrates how a comic book about teens growing up during World War II (first issue in 1941) could maintain a certain nostalgia for teens growing up in the 1950’s,1960’s, 1970’s, 1980,s and even the 1990’s.   It has, in the past, managed to do so by being up to date without being relevant.  The fashions and fads were right but the kids never really changed.

Jon Goldwater, CEO and Publisher of Archie Comics, changed all that when he took the reins 5 years ago.  He has turned Riverdale over to zombies; killed off his main character and provided alterative world marriages for Archie to Veronica and Betty.  He also added a gay character which seemed daring at the time but seems now to be almost quaint; which possibly shows how much culture and society have changed in such a short time.  It also demonstrates how Goldwater’s Archie has been on the cutting edge of cultural changes that move at high speed.

It appears that Mr. Goldwater’s moves have paid off as according to a New York Times article by Gregory Schmidt, bookstore sales have increased by 736% percent since 2008.  Sales in comic book and specialty stores have increased by 226% in the same period.  One suspect that it is females who make up the difference between those bookstore and comic book shop percentages.  After all, comic book stores still tend to be dramatically more male than female destinations.

Archie Comics is not standing still as there is a Fox Network show in the works and a clothing line from Mark Ecko.   The folks at Archie are keeping me interested; how about you?