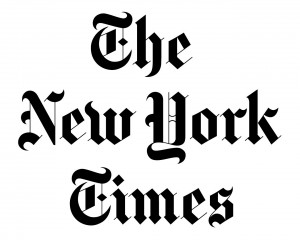 I would like to share something personal with you today about my father, me and our relationship around The New York Times.  This week I had the honor of having my quote selected by The New York Times as one three notable quotes in the paper during the previous week.  There I was, quoted on page 2 of the Sunday, February 1, 2015 New York Times along with the new President of Greece and a Chinese naval historian. Here are the quotes:

“It’s like we’re living in the Middle Ages.” – “Zhang Qian, a naval historian complaining about China’s widening restrictions on the web.”

“We will bring an end to the vicious circle of austerity.” – “Alexis Tsipras, the new Prime Minister of Greece, who threw down the gauntlet to European officials…”

“The toy industry is essentially a 19th-century industry desperately trying to break into the 21st.” – “Richard Gottlieb, the founder of Global Toy Experts, a consulting agency.”

I knew that I had been quoted earlier in the week by Rachel Abrams in her article, “Shake-Up at Mattel as Barbie Loses Her Appeal,” but I had no idea my quote would be singled out for recognition.  I was overcome with emotion.

In fact, my reaction was so strong that I wondered why.  I then recalled how my father, in our small town on the Virginia coast, used to read The New York Times every Sunday.  He was maybe one of a half-dozen people who made their way to the Langley Hotel (our only hotel at the time) where the Newspaper was held for him after being dropped off by the Greyhound bus.  Sometimes he would take me with him, all of six or seven and I would watch as the very serious looking man behind the hotel reception desk would hand over my Dad’s copy.  It had his name written in pen right across the top:  Morris Gottlieb.

My Dad worshiped that paper and so it came to embody for me something that seemed almost holy; after all it came on a Sunday, it had serious black type, it had no comics and my Dad would read it front to back.  It was serious.  I can still remember him sitting in “his” chair, gradually moving through the sections.

My Dad is long gone from this world but I would like to believe that he somehow knows that my words were singled out by his newspaper of record.  If he does, I hope he’s proud.  “I made it Dad.”