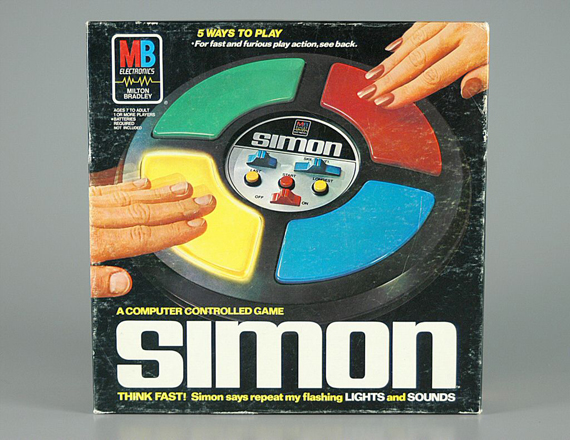 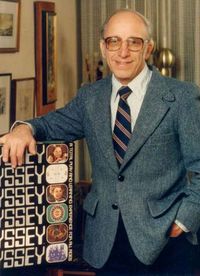 I was deeply saddened to hear that Ralph H. Baer had died on December 6, 2014, at the age of 92. As numerous other writers have noted, Ralph invented the “Brown Box” home video game console (produced as the Magnavox Odyssey) and the electronic game Simon. He donated his professional papers to The Strong, and I had the privilege of processing them in 2013. Ralph’s papers spanned more than 40 years of his lengthy career in the toy and game industry. As I worked on making his collection available for research use, carefully removing thousands of staples (because Ralph never used one staple when eight would do) and verifying that his carefully dated pages were in order, I realized that I was getting attached to Ralph. (Fellow archivists, back me up here—when you spend an extended amount of time examining a person’s handwriting and deciphering their personal organizational system, you start to feel like you know the person, right?)

The Ralph H. Baer papers in The Strong’s Brian Sutton-Smith Library and Archives of Play provide amazing insight into the thought process behind many of Ralph’s creations from inception to production. He kept meticulous records; he frequently said that the most important advice he could give to budding inventors was to document everything, making sure to date and sign every paper. An inventor may conceive of thousands of product ideas throughout his or her lifetime, only to develop a single contraption that makes it to the marketplace. Ralph, however, successfully produced dozens of memorable playthings. He owned 50 patents in the United States and occasionally found himself tied up in legal proceedings involving his designs. Simon, one of the most prominent electronic games of the 1980s, challenged users to duplicate a random series of lights and sounds. Ralph worked alongside fellow engineers and toy designers at Marvin Glass & Associates while developing Simon and two other unique electronic games, Maniac and Computer Perfection. (He later partnered with Smith Engineering and Phil Orbanes Productions.) Ralph’s notes, correspondence, drawings, schematics, patent information, and reference materials for hundreds of toy and game ideas (including M.A.S.K. Laser Command and Smarty Bear) are housed within his professional papers at The Strong.

A gem within Ralph’s collection is a digital draft of an autobiographical manuscript, titled “One Inventor’s Odyssey: The Life Story of an Engineer and Inventor—The Father of Home Videogames.” This fascinating multi-chapter, multi-media work details Ralph’s childhood in Germany, his family’s escape to New York from the Nazi regime, and his time fighting for the United States in World War II. He explains his interest in radio technologies, tells how he decided to become an engineer, and details many of the prestigious firms for which he worked. He transitioned from military electronics to consumer products during his mid-forties, and soon his home video game console made its debut. The rest, as Ralph put it, is history.

When I completed the finding aid (a description of records that assists researchers in accessing the materials) to Ralph’s papers, I sent him a copy. He responded with a lovely email and a standing invitation to visit him in New Hampshire to view and play with some of the toys I had learned about in his documentation. Though I never met Ralph in person, handling his archival materials and reading his tiny, looped handwriting fashioned the perception in my mind of a brilliant, hard-working, creative, playful entrepreneur.

Ralph wrote in his autobiographical manuscript, “Perhaps you or some other reader will be motivated to recycle some of these ideas, using modern tools to come up with a contemporary version and license it… I wish you luck, if you do.” The Ralph H. Baer papers are a fantastic resource for anyone interested in video game history, electronic games and toys, the process of inventing, and of course, Ralph Baer himself. When you hear the familiar harmonic tones of Simon, or pick up the light gun controller to play Duck Hunt on your old-school Nintendo, just take a moment to think about the man who pioneered these technologies for consumer use and your enjoyment. Thanks, Ralph.