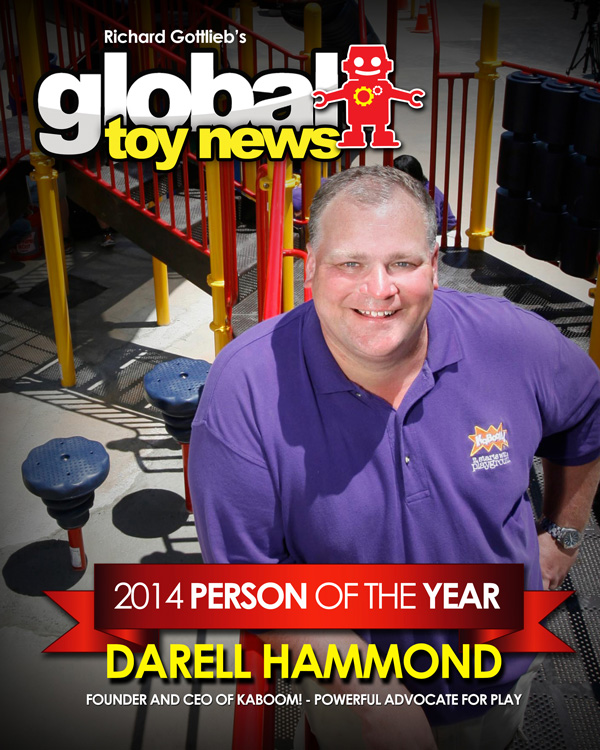 This year’s Global Toy News Person of the Year is Darell Hammond, founder and CEO of KaBOOM!  The Global Toy News Person of the Year award is given each year to an individual who has helped make the greater play industry a stronger, more enjoyable, more humane and  prosperous place to work.  Previous winners include Mary Couzin (2011), CEO of the Chicago Game Group; Kathleen McHugh (2012), President of ASTRA and (2013) LT Lam, founder of Fowind, Ltd. and Alice Doll Fashions, Ltd.

Darell Hammond is the passionate founder and CEO of the national non-profit KaBOOM!; the organization is dedicated to ensuring all kids – particularly the 16 million living in poverty – get the balanced and active play they need to thrive.  Mr. Hammond has said that no child should have to walk more than a block to have access to a playground and he has done more than anyone in America to make that happen. Since 1996, KaBOOM! has collaborated with partners to build, open or improve nearly 16,000 playgrounds, engaged more than one million volunteers and served 7.4 million children.

KaBOOM! is now also raising awareness about playability – the extent to which a city makes it easy for all kids to get balanced and active play.The Playful City USA program is part of these efforts.  As KaBOOM! puts it:  “Playful City USA is a national recognition program that honors cities and towns across the country for taking bold steps that make it easy for all kids to get the play they need to thrive.”

We are by no means the only ones who have recognized Darell and KaBOOM.  Darell made the Forbes Top 30 Social Entrepreneurs list in 2011; has been given the “Making a Difference Award” by Diet Coke and has been recognized by (and this is by no means a complete list) Crain’s Chicago Business; NYU Stern School of Business; American Express and WebMD.

Darell Hammond helps to make America a more playful place.  For that reason he should be a hero to anyone who plays and / or provides play.  He is certainly our hero and that is why he is our 2014 Global Toy News Person of the Year.