I’ve struggled to catch Saturday Night Live’s 40th season because I’m either out and about or asleep on the couch (usually the latter). But there’s a variety show that’s made for me—particularly due to its time slot and content—and it’s also celebrating an anniversary this year. The Mickey Mouse Club is turning 60. 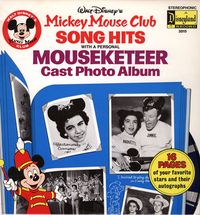 Walt Disney intended his first foray into television, the Disneyland anthology series, to help fund and market his new theme park. Disneyland’s Davy Crockett miniseries (ABC, 1954–1955) enjoyed such popularity that millions of official coonskin caps sold in the first few months. On the heels of this success Disney developed The Mickey Mouse Club (ABC, 1955–1959), and those Mouse ears gave the coonskin caps a run for their money. Young audiences regarded the talented, magnetic, wholesome child stars as something between old friends and heroes. And as the Mouseketeers’ chipper performances alternated with newsreels, serials, and cartoons, the hour melted away.

Variety and sketch comedy shows’ lineage goes way back. George Burns and Gracie Allen perfected the vaudeville and radio formats before producing their eponymous comedy television series (CBS, 1950–1958). Burns, delightfully self-aware, continually broke the fourth wall to comment on the program as himself. SNL (NBC, 1975–present) honors this device when actors break character during the cold open to announce, “Live from New York, it’s Saturday night!” and when hosts deliver opening monologues to the audience from downstage. This post is Part Eight in Lauren Sodano’s Screen-Play series. For more on toys, games, and all sorts of other stuff for play—past and present—from Lauren and her museum colleagues, visit The Strong's Play Stuff blog.