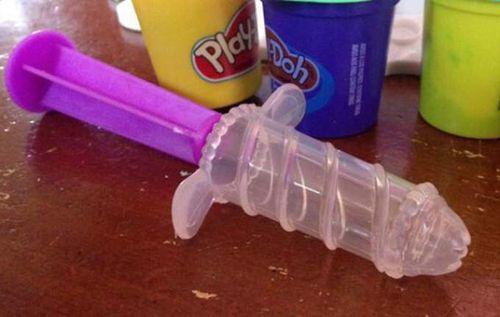 “Sometimes a cigar is just a cigar.”

It is doubtful that Freud actually said: “Sometimes a cigar is just a cigar.”  Whether he did or did not; it is still a useful piece of advice to remember when attributing a sexual meaning to a child’s toy.

That thought came to mind over the last few days as Hasbro came under fire for a applicator in its Play-Doh Cake Mountain toy that some described as looking phallic. Here are just two of the many headlines: (AP) “Phallic Play–Doh Accessory Called Disturbing; and (NBC) “Play–Doh Vows to Replace Phallic-Shaped Play Set After Outrage.”

How did this design get out the door.  Well, you can be sure that no one at Hasbro saw this toy, as any more than what it was, an applicator for applying decoration.  They were making a child’s toy, not a sex toy.  They were looking at the toy through the eyes of innocence.

Some adults, however, have given the product a meaning that was never intended and that a child, without adult prodding, would not apply.  After all, to the most part, children are innocent and adults are not.   That’s just the way the world functions but it’s a shame that an over-reaction by the few adults creates headlines and embarrassment for a principled company.

Should Hasbro have spotted this?  Are parents right to be concerned?  Is it all about nothing?  What do you think?