As we explore in our Global Licensing Continues to Stimulate Traditional Toys and Games global briefing, licensing is continuing to have an increasing impact on traditional toys and games with more toy manufacturers looking to create fresh intellectual property using TV and films and then leveraging these characters' popularity to increase toy sales.  However, as this trend becomes increasingly more prevalent, competition increases, making opportunities more challenging to find globally. 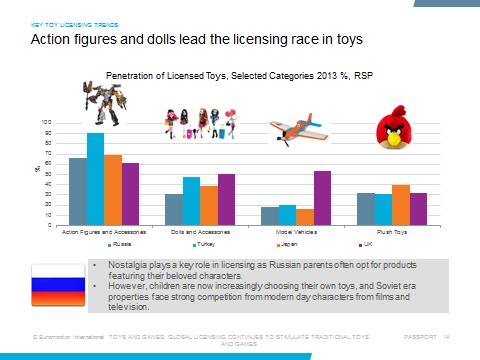 By 2015, Asia Pacific is projected to overtake Western Europe in toy sales

Rising disposable incomes, new product launches, the increasing penetration of organised retailing in rural areas and second-tier cities, as well as strong demographic fundamentals have all contributed to the region's outstanding performance in traditional toys and games in recent years.

More toy tie-in films scheduled to be released will continue to drive sales of licensed toys and as licensed toys still only make up around 25% of sales of traditional toys and games, there is still scope for growth globally.

Out of these four, construction toys was the highest with absolute sales growth of US$138 million in 2013. However, the percentage of licensed toys remained more-or- less static in 2013, at around 30%, so growth in licensed toys has not necessarily come from a decline in non-licensed toys, but rather from the growth of the category as a whole.

As more licensing opportunities become available from new film content, increasing competition between toy manufacturers for the best licences could leave smaller toy companies in the dark and bigger companies with lower margins from licensed products. Therefore, a well-balanced licensing strategy is potentially more important now than it has ever been.