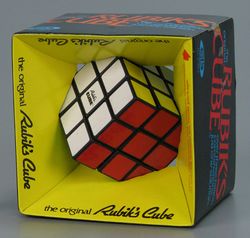 Initially known as the Magic Cube, today’s Rubik’s Cube—a six-sided puzzler that has challenged several generations—holds the title of best-selling toy of all time. Along with bubbles and little green army men, Rubik’s Cube is one of the 2014 inductees to The Strong’s National Toy Hall of Fame. I first tackled the cube in the early 1980s during the initial craze. I solved about one and a half sides and then gave up. However, in the process, I discovered that solving the cube had to involve a systematic series of repeated patterns. But like many casual puzzlers, I found that utilizing a pattern to solve a side seemed to undo the progress I’d made on a different side. Puzzlers more serious than I found ways to systematically manipulate the cube in serial patterns without disrupting progress already made—and to backtrack to repair previously-solved sides.

Solvers call themselves cubers, and these pattern systems are algorithms. In mathematics, an algorithm is a series of defined tasks, such as equations, used to arrive at a predictable result. Cubers have defined shorthand ways to name each side—and indeed each mini-cube within a side—and write out algorithms to solve the multi-colored conundrum. If it sounds like serious math, it is. Rubik’s Cube demonstrates mathematical group theory, meaning that cubers use formulas within well-defined subgroups through increasingly difficult levels. We may not all understand this math, but a computer does—which is why computer-controlled “hands” can solve the puzzle faster than humans. Thus far, anyhow.

Speedcubing (or speedsolving) is now officially recorded by the International Cube Association (ICA). And small local competitions follow the ICA’s rules. As of 2014, 19-year-old Mats Valk of the Netherlands held the speedcubing record for a single solve at 5.55 seconds. The ICA also keeps records on solves involving the best average out of five attempts, blindfolded (with a visual review beforehand), multiple blindfolded (a series of cubes to solve), fewest moves, one-handed, and solving with one’s feet. Other non-sanctioned events include fastest solve underwater on one breath and fewest possible moves—in which the contestant has one hour to solve the cube and then must write it as an algorithm. Rubik’s Cube may not be as popular today as it was during the early 1980s, when cube-solving guides held three of the top four slots on the New York Times paperback best-seller list and a cube-shaped character named Rubik was the star of a Saturday morning cartoon series, but it remains a solid seller and a classic and iconic toy. It is estimated that one in seven people on the planet have tried to solve it. I have a cube near my desk, as well as a solving guide. I’ve solved one side and two rows beneath it all around. I’m still tackling the complicated algorithm for solving the final row and bottom. I know I can do this!