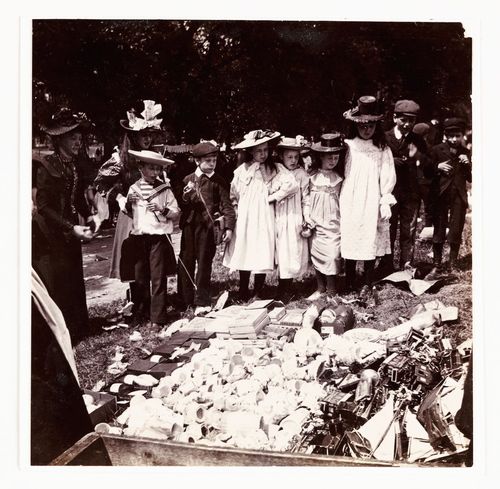 I love this picture from the late 19th early 20th century depicting a group of children eyeing a pile of toys with what appears to be some skepticism.  It appears that they are prizes in a game.  If you look at the woman on your far left you will note that she is about to throw a ball towards we know not what.

To get a better look at them and the toys, put your cursor over the picture and enlarge. Here were some of the images in the picture that caught my eye:

1.    The boy in the sailor suit on your left of the picture.  I suspect that based upon his outfit and that stick he is holding that he was playing with a boat.  Whatever he was doing, he looks dressed in a way guaranteed to get him beaten up by the other children.

2.    The three girls in the middle who seem to be looking askance at the entire pile.  They seem disgusted by the selection.

3.    The toys themselves are interesting.  "I spy" a bugle, lots of train cars, a sailboat, some balls and books.

Let us know if you can spot some of the toys at which your ancestors were gazing.