Little green army men marched right into the National Toy Hall of Fame at The Strong on November 6, 2014. The tiny figures, along with Rubik's Cube and bubbles, took their place of honor among the other 53 classic toys that evidence the iconic status, longevity, and play value necessary for induction. The green army figures, especially, encourage the open-ended, imaginative play that fosters creativity, learning, and discovery. 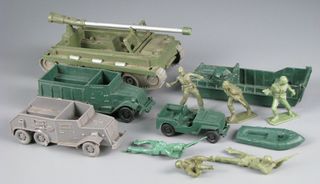 These small figures, two to four inches tall, represented soldiers in the mid-20th-century U.S. Army, mostly infantrymen carrying midcentury equipment and weapons. Little green army men, first produced in the 1930s, had evolved from toy soldiers of the early 1900s made of tin, metal alloys, and lead. The later figures, though, were quite different. Toy makers molded the soldiers in the ubiquitous olive drab of the U.S. Army. Green army men also introduced plastic as a malleable and durable material and a suitable replacement for dangerous toy soldiers of lead. Green army figures also came in many action poses that encouraged different battle narratives for children’s play. Sold for just pennies a piece, these little plastic figures were easy to come by and easy to replace, which inspired some boys to destroy soldiers in lifelike explosions using the caps from their toy cap pistols and purloined firecrackers from holiday celebrations.

For boys of several generations, deploying green army figures or blowing up a few was something of a rite of passage. Small wonder that game makers like 3DO and Global Star fashioned electronic games replicating the play of young boys and their green army men. The two companies have offered more than 25 different titles featuring the little green guys since the 1990s, proving the enduring popularity of these tiny figures of make-believe. A recent donation to the museum reminded us that little green army men make a lasting impression on some. Major William Hartel of the U.S. Army Reserves donated a collection of figures that he calls “trench art” army men. While stationed in the Middle East in the summer of 2014, Hartel made figures reflecting modern-day soldiers. He created his troops from the standard green figures available at any base PX or discount store. He set his figures in the “blazing desert heat” until they were soft enough to remold, and he cut small white electronic devices from chow-hall utensils to represent the cell phones and electronic tablets of today’s military. Hartel fondly remembers playing with little green army men as a young boy, and those memories inspired him to make his “trench art.” He also speculates that that he joined the reserves after a 30-year civilian career as a dentist in part because he so enjoyed playing with the small green figures—which just goes to show you why little green army men have been enlisted by the National Toy Hall of Fame.