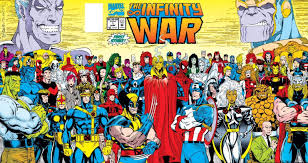 In my last posting I noted that Marvel alone would be launching 3 movies in the summer of 2015 featuring no less than 16 characters.  How is a fan, particularly a child, supposed to form a bond with any one character?

That makes for 30 costumed characters on the screen in 2016.  That's great for box office but mayhem on the store shelf.  How do you begin to merchandise so many characters in such a way that you provide a range of choices without going to deep on any particular one?

If that is not challenging enough for retailers; between 2015 and 2020 there will be four movies featuring Iron Man and Captain America.

If I am a child or the parent of a child who loves Captain America or Iron Man; do I really need to purchase a different version each year?  At one point is the market saturated?

Marvel and to a lesser degree, DC, have colonized the toy and play industries with their brands and mostly to the good.  It concerns me, however, that the goose may be laying too many golden eggs.  What do you think?