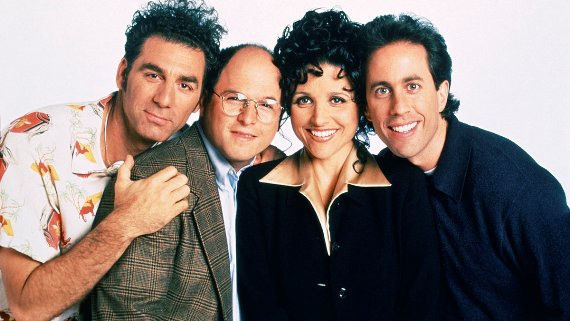 Seinfeld is not, as people often claim, a “show about nothing.” It is a television show about four narcissists whose seemingly petty dialogue and ripple-effect exploits produced a significant impact on the modern pop culture landscape.

I confess―I’m a Seinfeld devotee. In fact, I recently completed my own personal “Summer of George,” where I re-watched every episode from the pilot through the finale. While I frequently caught myself reciting the lines along with the characters, I realized the brilliance of the show was in its relatability for a wide audience. I’ve been in many-a-situation where I’ve incredulously thought, “I feel like I’m on Seinfeld.” (Ask me about the time I reserved a rental car in France and ended up sputtering “You know how to take the reservation, you just don’t know how to hold the reservation, and that’s really the most important part” at the counter attendant.) Some of my favorite vignettes from the show involve Jerry, George, Elaine, and Kramer chatting around a booth at the ubiquitous Monk’s Café. Other stories depict daily life in Manhattan: commuting, running errands, ordering take-out. Peripheral characters come and go, making their mark on the series with memorable catchphrases (“No soup for you!”) or descriptors (“she’s a low-talker”). Our four protagonists, though often selfish, just want to be successful and have fun.

Seinfeld is actually quite playful. From the Superman figurine displayed prominently in Jerry’s apartment to the games and sports played throughout the series, the show’s writers convey nostalgia, competition, and creativity. Plots involving play are as common as the gang’s visits to the Cineplex. Long-time fans of the show will recall episodes highlighting the game of Risk, Susan’s doll collection, and Kramer’s penchant for driving golf balls into the ocean. Several of my much-loved installments, listed below, rely heavily on toys or games to advance the storyline.

En route to the Hamptons, Jerry is supposed to make a pit stop at the home of one of his biggest fans, the Bubble Boy (“He’s a boy, who lives in a bubble!”). While Jerry and Elaine get lost, George and his fiancée Susan end up at the Bubble Boy’s house. To avoid awkward family chit-chat, George and Susan play a game of Trivial Pursuit with the Bubble Boy.

Jerry dates a woman named Celia, who has inherited an amazing classic toy collection―however, she won’t let Jerry play with them. (Many of these objects have been inducted into The Strong’s National Toy Hall of Fame.) Toys shown in this episode (and coveted by Jerry, George, and Elaine) include G.I. Joe, little green army men, Play-Doh, Etch A Sketch, Super Ball, Mattel Electronics Football, and the Easy-Bake Oven. George discovers that he still possesses the all-time high-score on the Frogger arcade game at his old high school hang-out. He purchases the Frogger machine and devises a plan to keep it operable during transport from the pizzeria to his apartment. Unfortunately, Kramer’s crew runs down the battery, and George is forced to play a life-sized round of Frogger with the arcade game while he crosses the street. (The International Center for Electronic Games frequently has its Frogger arcade game on display in eGameRevolution; stop into The Strong museum to test your own Frogger abilities!)

Though other television shows exhibit playful plots, I will forever associate many classic toys and games with Seinfeld. The series ended in 1998 after an amazing nine-year run (yada yada yada), but the misadventures of its main characters live on via syndication or DVD box sets. Game manufacturers have since taken advantage of the show’s popularity and built-in fan base, creating interactive board games such as Seinfeld Scene-It, Seinfeld Monopoly, and Seinfeld Clue. (I keep a perpetual scorecard showing win/loss statistics of Seinfeld Scene-It matches between me and one of my best friends; I am ahead by a single game.)

The competitiveness of these games, coupled with the nostalgia of remembering some of Seinfeld’s greatest moments, is really in the spirit of the show itself. (As long as there’s no cheating involved… I think we can all agree that the Moors are actually the group who invaded Spain in the eighth century.) Now, does anyone want to meet me at Monk’s for a round of Trivial Pursuit?