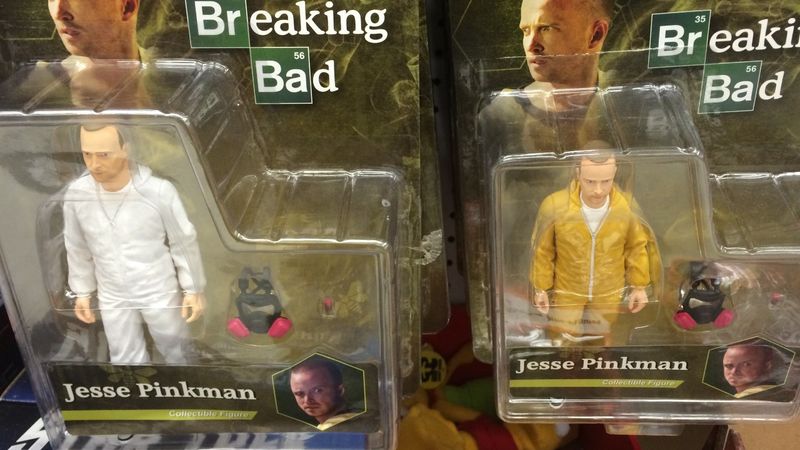 "I always make sure my children have age appropriate toys and I never let them watch adult-oriented prime time TV," Shrivjer didn't say, because blaming a toy is easier than blaming yourself.

You see, most parents recognize the need to filter their children's entertainment content and playthings, lest grandpa show little Brian Showgirls or a hunting knife end up in the toy box next to Barbie and Furby. Shrivjer undoubtedly cares about her kids, it's executionally where she stumbles. Shrivjer must have worried over what would happen if her child saw the Breaking Bad action figures on the shelf and said "want!" Such a horrible event could only resolve two ways:

"Son, that articulated plastic action figure is meant to portray Walter White, Bryan Cranston's popular Methamphetamine cook on the mature rated AMC hit Breaking Bad. I suppose I am forced to immediately purchase it for you before driving home and starting a petition."

"Oh, that's Walter White from your favorite show Breaking Bad, honey. Let's get that and worry about age appropriate interests when you turn 18."

"That's an alien dude in a weird orange space suit and mask. But he's lame so let's look in a different aisle."

"You're not old enough."

Seriously, should the rare moment occur when a child wants a Breaking Bad action figure, he or she is either watching the show (which isn't a great sign of quality parenting), has no idea what the toy is, or is secretly known as Mini Heisenberg and you have more than just plastic depictions of blue Meth to worry about. The above paragraphs may imply I'm angry with Schrivjer and her funny petition pastime, but I'm only disappointed. Parents face many battles today, many legitimate fears. There is so much entertainment, so many new foods, so many new toys and video games and ads all over the place. Parents don't always know where to expend their effort in the parenthood battle. I firmly believe the world is filled with wonderful parents who devote their every effort to raising their children. There's just bound to be a loon, or 9,000, mixed in.

I'm also disappointed in ToysRUs who previously seemed interested in serving their diversified audience. I understand their actions, but I don't believe they were appropriate in this instance. It’s stunning how quickly the universe forgets about dumb online petitions. No one even noticed this nonsense until ToysRUs went ahead and pulled the product from shelves. Next time, sleep on it. By morning everyone will be back to worrying about Ebola, which actually has ruined childhoods and taken some 10,000 lives.

Remember when comic nerds got picked on by jocks, swirlied and wedgied probably atomically so? Things have changed a bit and the mainstream popularity of nerddom has made the world a lot more fun. The president is a big nerd. Avengers is the third biggest film in history. Heck, Fern Gully remake Avatar is the biggest of all time, which should help Dungeons and Dragons players get at least a little street cred.

Why, then, am I seeing articles like "The Ban on Breaking Bad Figurines Reveals Just How infantilized We Are: The Adult Toy Purchaser's Claim That They're a Collector Doesn't Change The Fact That They're Playing With Dolls" by Rupert "Fart Head Lamo" Myers of The Guardian?

Fart Head's –I mean Myers' argument seems to be that adults who play with toys are lost in childhood, unable to grow up, jobless, living in their parent's basement. He says, "One of the greatest defining elements of adulthood is that our mature imaginations don't require physical playthings."

There are so many jokes to make right now involving Myers and his physical plaything but I've already resorted to infantile name calling so I really shouldn't make them. Okay just one…okay no, I'm better now, stopped giggling. But he’s wrong don’t you think? While Myers tries playing without…physical…playthings…the rest of us are busy playing board games, card games, video games, posing our dorky action figures and trying to make super awesome couples Halloween costumes of Rocket Raccoon and Groot from Guardians of the Galaxy. We're busy blasting each other with Nerf blasters and trying to make an old Skip-It we found at mom's house work again. We're turning our breakfast into faces and then making out with them, especially if it's a French breakfast, oh la la. We're playing sports and riding our bikes or doing funny deep Christian Bale Batman voices while ziplining. We're hiding whoopee cushions on the couch because farts are hilarious. We're spending hours debating whether Superman could defeat Darth Vader (yes, of course he can…unless it's a red Kryptonite lightsaber!) then hiring professional artists to depict the battle on canvas. We're painting pictures of our cats as superheroes and figuring out how to run them in public government elections. We're buying geeky action figures because they are pretty cool in a geeky kinda way.

Or maybe it's just me. Whatever, I might be infantile but at least I'm not a Fart Head.

The above views and ramblings represent the author's views and no other party of which he is affiliated. In his roles as design manager, strategic partner development at Hasbro and ChiTAG committee member, Brian Torney is an innovator in the play industries, kids entertainment, and product/brand initiatives. Refusing to grow up, Brian has been contributing to the play industries since the age of 15, when he worked at a Chicagoland Toys R Us store. He specializes in cross-platform brand storytelling. Brian also practices ancient Jedi techniques of mind control… These are not the droids you’re looking for.