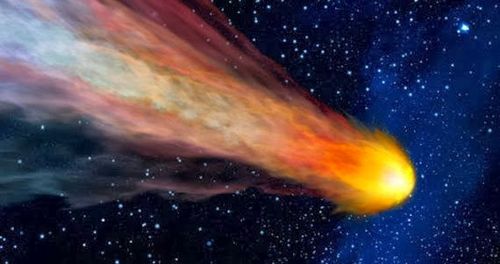 This is the story of how I was almost struck in the head by a fiery coconut.  This amazing event took place while I was in Verona Italy for the Tocati outdoor game festival.  As I wrote in my last posting, "Games, Romeo & Juliet and Wine: Verona's Outdoor Game Festival," the Tocati Festival is a celebration of outdoor games from around the world.  Each year they honor a different country and this year it was Mexico’s turn. 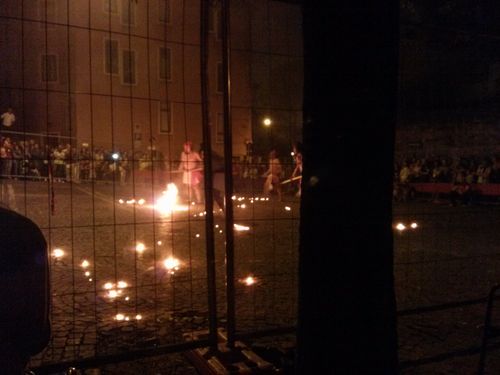 Mexico has many interesting games like throwing ears of corn, playing a form of soccer that only allows you to hit the ball with your hip and Fireball.   Fireball sound dangerous don’t you think?  Well all I can say after watching it is “Yes…yes it is…yes it is.

Fireball was invented by the Aztecs.  It has something to do with the Aztec Sun God.  Frankly, I think somewhere back in time a bored Aztec must have said:   “I have an idea.  Let’s set a ball on fire and hit it with hockey sticks.”  Apparently someone else said:  “Cool, let’s do it” and Fireball was born.

My friend Leila and I had decided before I even arrived in Italy that we wanted to see a Fireball game.  I must admit we were a little nervous about it so we made lots of jokes about being killed by a ball of fire.  Little did we know…?

When we arrived at the match we could see that the play area was roughly 100 feet by 30 feet and was surrounded by a wire fence that was approximately 10 feet high.  I actually never learned the rules but what I can tell you is that it involved soaking coconuts in gasoline and then lighting them on fire.  The hockey sticks or Fireball sticks were made of wood and would sometimes catch on fire as well.  It was all very fiery.

The game took place at night so it was pretty spectacular watching the flaming ball being hit back and forth by four very large men dressed as Aztecs.  It was exciting but never more so then when the fireball would sail over the fence and into the crowd.  As you can imagine, this would cause some frenzied screaming and running.  It was a bit like the Kentucky Derby if the horses occasionally ran up into the stands and sent people stampeding.

This happened quite a few times so I was not overly alarmed when one rose high up over my section.  I was a bit startled, however, when like a cruise missile it began its downward descent directly at the top of my head.  I sat there in my chair, not frozen in fear but in amazement that I was actually going to be hit in the head by a fiery coconut.

I need to stop here and tell you that once; walking across a Manhattan intersection I was almost run over by a Taco truck.  At the time I thought it would make for an interesting funeral and that people, if they remembered me, would recall me as the guy who got killed by a Taco truck.  In fact, it even occurred to me that my children could sell naming rights for my funeral to Taco Bell or Frito Lay.  There was a certain dignity in being killed by a Taco truck but a burning coconut? I don’t think so.

Anyway, as I sat there looking up I was thinking “this is going to hurt.”  But then the coconut, miraculously hit a tree branch, and CAROMED OFF RIGHT AT MY FRIEND LAILA.  She, not as in awe as I and possibly a little quicker, ran like crazy.  If she would have stayed she would have been missed by inches.

I don’t think Fireball will ever become popular in the United States because there is not enough liability insurance in the world.  Never-the-less it was certainly exciting and I am fairly certain that the next time I go I will not be hit because it must be similar to getting hit by lightning.  I hope so because I want to see it again…only this time from the back row.