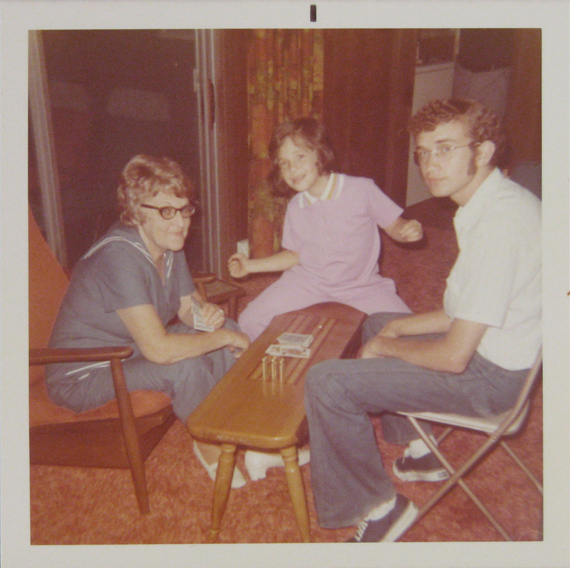 What is your game? There seem to be an infinite number of games to play with one simple deck of playing cards. What game did you learn, perched on your parents’ or grandparents’ knees? What game brings you feelings of home and belonging?

My family’s game was Rummy. After we had mastered Go Fish, we were armed with egg carton card holders (30 years before the collective creativity of Pinterest) and introduced to the game, “according to Hoyle.” My sister and I learned the game by losing spectacularly to our parents. We learned to discard defensively, dropping a card we needed so that someone else didn’t get the card they needed. We watched everyone’s hand after getting burned by scooping up a long string of discards, only to have the next player go out on three Aces. We figured out that my father was always holding: keeping his cards until he could play them all at once with a victorious cackle. At our kitchen table—over ginger ale, corn chips, and a deck of cards—my sister and I were initiated into the social mechanics of our people: competition was fierce but friendly (once you learned to dish out your own victorious cackles), rules were followed, and intelligence and strategy were prized.

My sister went to college in Ohio and was dismayed to find that it was Euchre territory. I find Euchre players terrifying. A friend once gave me a quick tutorial in order to make a foursome to play the game. I couldn’t pick it up quickly enough and the three of them were furious. Years later, I witnessed the rages of a senior group that played Euchre at the library. From my office I could hear the angry voices rise until someone would pound the table and stomp off, swearing never to return. They would all be back the next week to start the angry cycle over again.

Students played raucous, late-night games of Spades in my college dorm in Virginia. It seemed a lot happier game than Euchre, but it was just so loud that I never found the courage to try to play. When I discovered that two of my new friends knew how to play Rummy, I was overjoyed. I had found my people! The three of us spent many happy hours playing Rummy with my Ollie North Pack of Lies deck that I had picked up at the Young Democrats information table on campus. As I was avoiding Spades and renewing my love for Rummy, my husband-to-be, Jeff, was learning to play Spades in the Navy. Rising to popularity in the late 1940s, Spades became the number one card game played in the military services and on college campuses. The game is easy to learn and provides the opportunity for partnership play: is there a better way to bond with shipmates (or dorm-mates) from different backgrounds? Spades creates common ground, encouraging teamwork and competition at the same time. Where I had been afraid to join in the game, Jeff joined in and made lifelong friends in the process.

Before he and I got engaged, I taught Jeff to play Rummy. We felt like we spent too much time co-existing on the couch, staring at the television, and were looking for something that would actually let us talk to each other (after all, we kind of liked each other). As I walked him through the rules and we played our first hand, I felt I was showing Jeff some of what makes me who I am. I was introducing him to my people. Six months later Jeff called my father and told him that he had been losing at cards to me every night—and that he wanted to spend the rest of his life trying to beat me at Rummy. Jeff’s family plays Hearts. I was hesitant to learn the game, nervous that it might have the decibel level of Spades or the fury of Euchre, but I knew that Jeff was eager to share the game of his people with me as well. I agonized: if Hearts was loud and frightening, how could a Rummy girl marry into that family? I took the plunge after one practice round on the computer, where I shot the moon—completely by accident. Fortunately, Hearts requires many of the same skills as Rummy: memory, concentration, and observation of your opponents’ style and strategy. There is also the goddess of wisdom who can be your savior or your downfall and plenty of opportunity for victorious cackling. I think our people will all get along just fine.