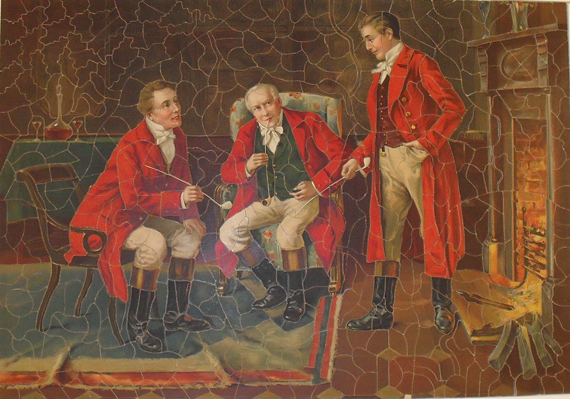 Today gamers often seem immersed in their favorite games. But serious, focused gaming is nothing new. Just after the turn of the 20th century, many Americans concentrated and deliberated in a similar manner trying to assemble the latest plaything for adults and families—jigsaw puzzles.

Historically, jigsaw puzzles originated in Europe during the 18th century, when mapmakers and printers glued pictures to wood, and then cut pieces by hand. Beginning as teaching tools for children, puzzles became a staple of early childhood education and entertainment. Many factors contributed to the brief craze for hand-sawed wooden jigsaw puzzles in the early 1900s, but it was limited to people with money because the first adult puzzles were too expensive for most working-class Americans. Thanks to the foresight of puzzle collector and expert Anne D. Williams, The Strong holds a jigsaw puzzle cut by George W. Fiss of Philadelphia, around 1913. The puzzle was a gift to the museum from his granddaughter, Helen Fiss Corson. Fiss and his nephew G. W. Fiss, Jr. cut puzzles as a hobby, not for sale. The puzzle is special, though, because it came with a journal in which Fiss recorded all of the people, including friends and relatives, to whom it was lent. And he was a devious puzzle-cutter. He mastered color-line cutting, that art of cutting straight along a line where a fireplace met a wall or a chair leg met the background color. It took a group of four volunteers and staff from The Strong, working a few hours a week, several months to assemble this relatively small puzzle. And we had the advantage of referencing a photograph of the completed puzzle. Originally, the puzzle did not come with a picture. Early puzzlers would have considered that cheating. George’s nephew G. W. Fiss Jr. cut a larger puzzle in 1910. Utilizing an illustration that served as an advertisement for Pears’ Soap, this puzzle features color-line cutting, as well as divided corners—corner pieces purposefully cut on the diagonal so that puzzlers couldn’t identify them as quickly. But, beyond these stumpers, the younger Fiss cut the most challenging “spider web” of pieces in the upper left corner. Imagine trying to decipher that all-brown puzzle piece placement! I guarantee it would take hours, if not days.

I was surprised to learn how much deliberation and work it takes to assemble these early 20th-century jigsaw puzzles and how much fun it is to find the correct spot for even a single piece. A few manufacturers today attempt to reproduce early 20th-century jigsaws; others make contemporary examples just as challenging. So if the latest video game doesn’t catch your fancy, check out the puzzles on display in Game Time! and try getting absorbed in a jigsaw puzzle instead.