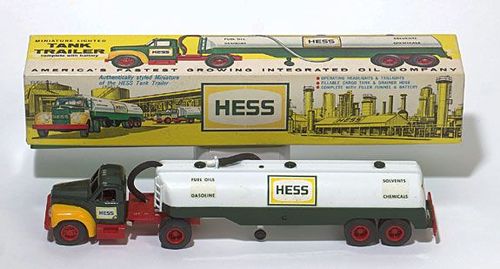 The Hess Toy Truck is celebrating its 50th year in 2014.  In that time, it  has become an integral part of  many an adult’s (and future adult’s) Christmas memories and has accordingly achieved the status of collectability.

Others will rightfully wax nostalgic about their favorite edition but to me it represents some incredibly smart branding.   I don’t know if Mr. Hess intended it to happen, but the Hess toy truck has extended that brand from being a regional gas station logo to becoming an iconic brand.

I have always been amazed that more companies don’t use toys as a gateway to their brands.  As John Nens of the Ford Motor Company put it about his company’s licensing of toy cars: "They'll always remember the great time they had with their favorite Ford ride-on toy or Matchbox-sized car, and they will carry that relationship with the brand all the way to when they finally start buying vehicles."

Similarly, adults in their 20’s, 30’’s and 40’s know the Hess brand largely through those television ads that became so much a part of Christmas time.   It appears that the company logo is going to be disappearing from America’s highways.  The company sold its retail operations this year to Marathon and the outlets will rebrand to Speedway over the next three years.It will continue as an exploration and production company.

Never fear, the Hess truck will continue to be a Christmas staple.  In an age of so many landfill toys, it is nice to see a legacy toy like Hess making it to 50.  Hess Truck, happy birthday and may you have many more.