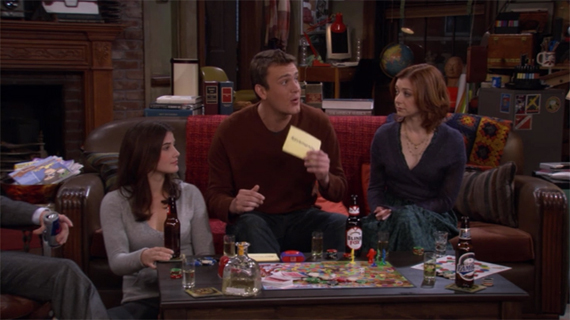 Pendulous grey clouds loom ominously to the west. Today is not an outdoor day. Salvation is in the closet, where colorful boxes of boards, cards, and tokens beckon us into other worlds. Games pass the time, make us laugh, and strengthen bonds among loved ones. The Strong is proud to preserve the history of games and inventors. As I tend to do, I turn to television and find characters having a grand old time creating their own games, too. I don’t foresee them experiencing the same levels of success as their counterparts represented at the museum, but why don’t you decide?

Ben Wyatt of Parks and Recreation
The Cones of Dunshire

As an 18-year-old mayor, Ben developed an ambitious winter sports complex that bankrupted his town. At his bachelor party, he elected to play The Settlers of Catan over other forms of entertainment. When last left to his own devices, he buried himself in stop-motion animation. Finally, while unemployed, Ben unleashes his most epic creation: The Cones of Dunshire. The rules are so convoluted, the setting and cast so expansive, that Ben can’t figure out where to begin explaining them. His geeky delirium is charming. Parks and Rec trots out Ben’s game in later episodes to the delight of accountants and gamers alike, and a few dozen superfans will play a real-life demo tomorrow at Gen Con in Indianapolis. (If you’re there, Mayfair Games will be using a floor game with giant pieces, so it’s worth watching from the sidelines, even if you didn’t spring for one of the $100 tickets benefiting Indy’s Food Bank.)

Stepping out of Pawnee and onto a tennis court, Parks and Rec creator Michael Schur transformed the game of Eschaton into a music video for The Decemberists’ “Calamity Song.” David Foster Wallace presented Eschaton as a global nuclear crisis simulated by fictional tennis-academy students in his novel Infinite Jest. In a highly regimented environment prizing physical and mental discipline, the kids blow off steam by bombing the world into oblivion with computer algorithms and tennis balls. Ultimately, in both the book and the music video, rules and structure dissolve as the kids are overwhelmed by their desire just to whale on one another. It’s not an easy game to recreate, as Outside magazine can attest, but Schur aced the video. (Is Colin Meloy in a Ledgerman hat?)


Marshall Eriksen of How I Met Your Mother
Marshgammon After Marshall’s friends grow tired of losing, they invite him to lead a game night rather than play in it. He “combines all the best features of all the best games,” including a Candy Land board and a Taboo buzzer. Real-life inventor Ron Dubren developed games similarly. His prototypes for Channel Zap and Strobe Fever from The Strong’s collections show how he reconfigured found objects to suit his own ideas. Marshall keeps the rules loose so he can use his game to interrogate Ted’s new girlfriend.

When unlikable people who need no excuse to consume alcohol (they run a bar) want one anyway, they create Chardee MacDennis. This is no True American. The drinking game comprises trivia, physical competitions, and sadistic humiliations. There’s a bulging rulebook with provisions for every imaginable scenario, a first-aid kit, and well-worn action figures. (“The winner gets to smash the other team’s game pieces,” Dee says. “It’s incredibly gratifying.”) The gang has played often enough that rituals have emerged: repeating trivia answers from memory, chanting, and nailing down the board before an angry Mac invariably tries to flip it. With newbie player Frank as audience surrogate, we learn the rules as we go along and become increasingly horrified. Frank is stuffed in a dog kennel, eating raw flour and eggs. Dennis takes a dart to the hand. Everyone cheats. The final round ends in a tie. And how does the rulebook direct players to break the deadlock? A simple coin toss. The ending is satisfying—but for whom? Don’t television characters ever play the same games we do? Or stick to the rules? Sure. Well, sometimes. I’ll offer some examples in the next installment of my Screen-Play series over on The Strong's Play Stuff blog.

What qualities might a successful game inventor possess? Persistence. Innovativeness. Attention to detail. The ability to anticipate how players will use the game. A knack for communicating complex ideas clearly so players can internalize the rules. Ben probably had a good thing going—I’d try The Cones of Dunshire. Which fictional game would you most like to play?

This post is Part Five in Lauren Sodano’s Screen-Play series. For more on toys, games, and all sorts of other stuff for play—past and present—from Lauren and her museum colleagues, visit The Strong's Play Stuff blog.