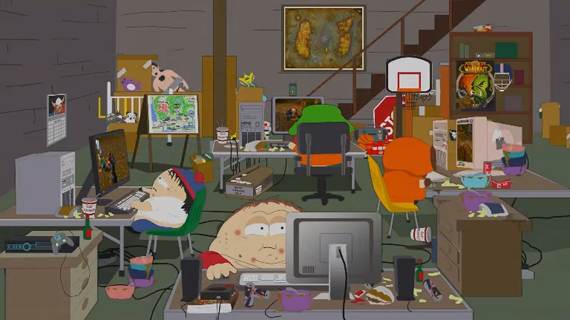 “Finish him!” “Save the princess!” “Time is running out!” Video game designers excel at creating high-stakes environments. And television has earned some laughs depicting the obsessive players who heed these calls to action. Here are some of the memorable ways television shows have turned video games into life-or-death situations. 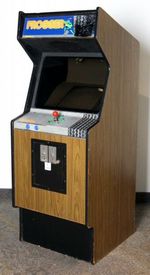 George holds the high score on the video arcade machine at a pizzeria that’s going out of business. “I’m never gonna have a child,” he tells Kramer. “If I lose this Frogger high score, that’s it for me.” To preserve his legacy, George needs to move the machine without cutting power. A birds-eye view reveals his Frogger-like dance across a busy street. Do you remember how the story ends? (Ouch.) Lonnie McDonald, who reigned as Joust champion of the world in 1982, took a different approach. Between 2011 and 2013 McDonald rolled the 9,999,999 score on 100 Joust video arcade machines, including The Strong’s example, and registered his initials at the top of each list.

Friends: “The One Where Joey Dates Rachel”

Phoebe monopolizes Monica and Chandler’s Ms. Pac-Man video arcade machine and lands all the high scores. Chandler spends a day replacing Phoebe’s initials with dirty words (at the expense of his hand, which stiffens into a claw). Unfortunately, unplugging the machine won’t erase its memory. The friends race to clean up Chandler’s mess before Monica’s nephew sees it, but ironically, Phoebe’s epic and nasty meltdown ends up on display instead. The episode captures the feeling of the video arcade, with friends watching over players’ shoulders and balancing the etiquette of taking turns with the desire to drop in just one more quarter. Home consoles and online gaming have diluted that experience but satisfied players’ cravings for nonstop action.

In World of Warcraft (WoW), a massively multiplayer online role-playing game (MMORPG), players from around the world convene in a virtual environment that is active whether or not they’re at their computers, a factor that fuels players’ urgency to participate. When an expert WoW player threatens to annihilate millions of his opponents, the South Park kids log mega-hours to save the world . . . of Warcraft. The Blizzard Entertainment game company executives (as portrayed by South Park, anyway) acknowledge that WoW needs a hero, yet they show contempt for gamers who “have no life”—implying there’s a fine line between immersion and unhealthy obsession. Setting much of the episode within WoW highlights how all-encompassing the experience can be. Watch it on the South Park website and enjoy the contrast between the glazed-over, out-of-shape WoW players and the powerful, intimidating avatars they control. Members of the college study group must play a video game designed by Pierce’s late father, whose dying wish was to bestow his wealth upon the winner. The estate’s villainous executor (played by Giancarlo Esposito, formerly Breaking Bad’s Gustavo Fring!) threatens to use his experience with the game to take the inheritance for himself. The students’ avatars explore an 8-bit world whose look and sound recall 1980s Nintendo classics like Super Mario Bros. and The Legend of Zelda. (Such rudimentary graphics bring humor to a violent scene in which the characters set fire to the blacksmith and his wife—a quality Buzzfeed’s Antonia Heslop recently infused into her 8-bit vignettes from Game of Thrones.) How self-important must Pierce’s dad have felt to demand that Pierce battle his friends to secure his bequest? For a rundown of other television characters-turned-game-inventors from despicable (two words: Chardee MacDennis) to endearing (think Parks and Recreation’s Ben Wyatt and Cones of Dunshire), look for the next post in my Screen-Play series on The Strong’s Play Stuff blog.

Far be it from me to criticize people who take video games seriously. The Strong’s International Center for the History of Electronic Games employs and serves them (doubly so as the museum hosts its Boardwalk Arcade exhibit in addition to eGameRevolution). And I suspect the creative folks behind the television episodes listed above would regard their portrayal of gamers as comically self-deprecating. After all, it takes one to know one.

This post is Part Four in Lauren Sodano’s Screen-Play series. For more on toys, games, and all sorts of other stuff for play—past and present—from Lauren and her museum colleagues, visit The Strong’s Play Stuff blog.