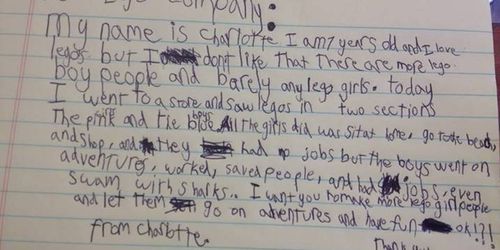 Lego Friends has been, by all accounts, a major success.  Not everyone, however, has approved.  One little girl, Charlotte, wrote a letter the company back in January that went viral.  It  is about as articulate as a seven year old can be in challenging the placement of "girl's" Lego in the "Girl's department and providing non-challenging character role models.  Here is how Charlotte puts it:

My name is Charlotte.  I am 7 years old and I love legos but I dont lke that there are more lego boy people and barely any lego girls.  Today I went to the store and saw legos in two sections.  The pink girls and the blue boys.  All the girls did was sit at home go to the beach and shop and they had no jobs but the boys went on adventures, saved people and had jobs, even swam with sharks.  I want you to make more lego girl people and let them go on advetures and have fun ok!?!

Thank you from Charlotte

This week I read that Lego  has released a construction set, "Research Institute" that features female scientists.  That’s according to The Economist in an entertaining but awkwardly titled article:  “Why Lego's new Research Institute range with female-scientist figurines is making news.”   The article notes that the new  set sold out almost immediately

Was it because of Charlotte?  Lego denies it but The Economist and other magazines like Jezebel, see the reason for the new entry as the result of Charlotte's letter. Maybe it was and maybe it wasn't. Let's hope it was so that it empowers other little girls to speak their minds.  And while we're at it, let's hope that Lego keeps paying attention to all the Charlottes.

Thank you Andrew Gottlieb for bringing my attention to this story.