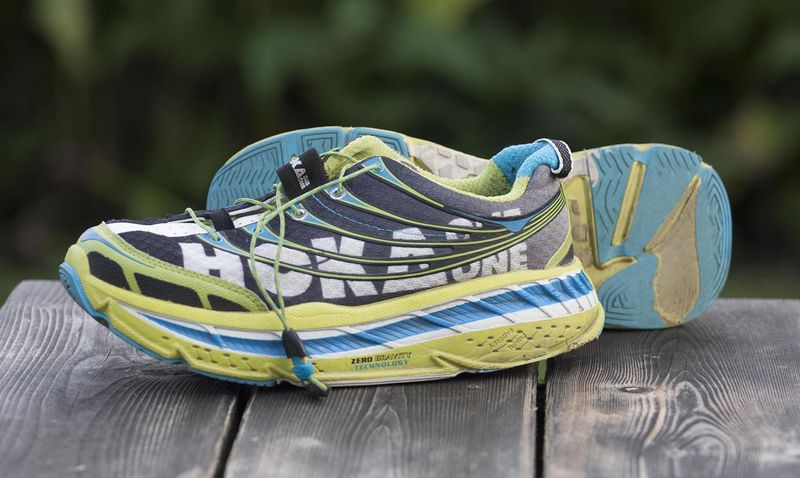 My well worn Hoka One One (Stinson Tarmac) running shoes clocking in at 130 miles.

We, as humans, take solice in the familiar and tend to repeat what worked yesterday, the day before and even several years back with very little thought to change. It worked then so it will work now—probably. It is fair to say all industries have to deal with some degree of status quo boxing them within a set preset—a repeatable pattern. Phyciatrists would call it a form of groupthink, subconsciously inhibiting any thought that may be considered new or foreign to their collective thinking.

Take the running shoe industry for example, which has focused on the strategic marketing of minimalistic shoe designs for years. The conventional thinking of this industry is minimal shoes are the best design for runners—all runners. Perhaps it is, but this foundational core concept treats everyone as the same identical person. In the real world, no person is the same except for big city politicians who, by the way, even tend to serve the same amount of jail time. I digress.

To be intellectually honest, in running you have to account for the differences between ages, male and female biomechanics and weight variations. Thin runners have no problem with minimalistic shoes because they are waifs barely touching the ground—I hate them all. Heavier runners on the other hand, bless their big hearts, tend to hit the ground with very little mercy to their ligaments and bones.

Any reasonable person would agree, like any other human endeavor age, weight and the host of other physical differences certainly do play a large part in how we run calling for more than one design solution to service such a diverse group of human needs and challenges. Wow, that was a long sentence. I apologize.

The running shoe companies who I love dearly and give much money to each year, circled the wagons betting the bank on minimalistic design. The mere thought of designing a thicker, more cushioned shoe would effect the current price margins demanding more material and forcing their long time employees to update their thinking and collective skill sets—good luck with that.

Yes my friend, even the slightest hint of proposing such a thought just might get you sent to the back of the bus. So, the dreaded box of groupthink was constructed and no one ever dared to step outside that directive bowing for years to the status quo, which by the way, was run by the same people doing the same thing in the same way for the same amount of time. I digress.

Leave it to the French who, strangely enough, are known for minimalistic servings of food in exchange for exorbitant sums of money. Only they would have the tenacity to buck the status quo (even their own) by reversing the design dynamic. Safely outside the confines of complacency, Jean-Luc Diard and Nicolas Mermoud dreamed up a new running shoe design demanding more—extra protection and re-direction of energy.

To be sure, they were dismissed as lunatics and banished to the outer realm of the mainstream shoe kingdom, who’s ruling class did little to hide their visceral disdain of such subversive thinking. Long story short, once the Hoka was released into the marketplace, physically challenged runners were not only able to extend their careers but also won some very high profile events. This caused the major players to take this new design seriously and make similar offerings.

What in the world does this have anything to do with toy design? Well, I'm glad you asked. The reason I featured the Hoka One One in this post is because they used the same design elements everyone else took for granted, transforming the ordinary into extraordinary. Imagine, actually dreaming up a design strategy making the shoe take the pounding instead of the runner. They turned industry groupthink upside down and in the process made my sore feet feel so much better.

Although minimalists still argue this point, runners with injuries and other such physical challenges have found themselves back on the road to living a healthy lifestyle. This once vilified design idea has now entered the mainstream paradigm having a profound effect on the way designers and runners in general think about biomechanics.

As companies scramble to offer their copies (I mean versions) of the Hoka, they fail to see the essence of what makes the design actually work. It’s not just slapping a thicker soul on a shoe and calling it a day, but going the next step every designer needs to do—make sure every area of that shoe serves a specific design purpose and function.

In this case, the heart of the Hoka design is the “meta-rocker” technology, which not only absorbs the hit of heavy energy with a thicker soul, but also rocks the foot forward re-directing that pounding toward the next stride. This design accounts for the individuality of unique human beings in terms of weight absorption and energy distribution.

So, let me put it this way, Jean-Luc and Nicolas love design that enhances their athletic lifestyle. That love, that personal passion, produced an amazing ride for runners all across this celestially challenged bouncing ball we call planet Earth. They stayed the course against everything the status quo threw at them. Why? Because they believed in their design and were convinced their golden idea would work—it did.

This fairytale ends with both men beating the one-eyed monster of complacency eventually selling their company for a boot load of cash. I think they used a dump truck and just backed it into the front yard. I mean, that’s the American dream baby—you come up with an amazing product design, fight to bring it to market and then you get a pile of cash backed up to your doorstep. I’m actually getting a little misty eyed right now. Give me a minute. Better. No wait. Better. . .

Seriously, though, when you love what you do, I mean really love what you do—you will bring passion, conviction and vibrant energy to your toy designs. You will dare to live outside the box and continue to seek out new solutions and new avenues others overlook. You will fight to stay relevant and push the barriers of the status quo like never before.

The Hoka One One running shoe design has helped me run farther and faster. Simple. Good design does the same by inspiring us to dream bigger and reach higher. You are a unique creative thinker who has unlimited potential if only you believe. Dare to dream and reach beyond your grasp. Have the courage to take creative risks others fear and never, ever, no matter what—give up.

Those of us in toy ideation would do well to embrace the inspiration of groundbreaking design strategies found in other industries. Together, as creative dreamers, we should continually explore the endless possibilities of design innovation that causes the advancement of human potential. This, like any other form of uniquely inspired innovation, can only be achieved through passionate resolve and living life outside the box.