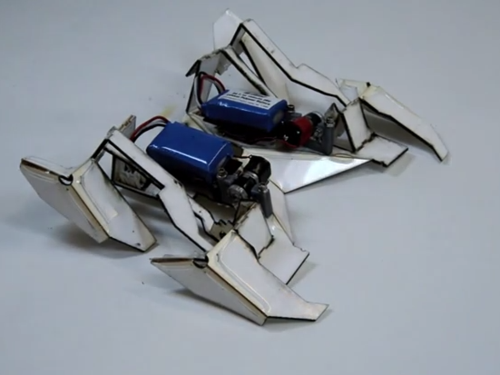 According to the journal, Science, graduate students at Harvard have created a robot which begins life as a flat sheet; folds itself on its own into a robot and then walks away at a rate of 2 inches per second.  Sounds eerily like Transformers.  Hasbro are you listening?

The New York Times in its article, “Origami Inspires Rise of Self-Folding Robot,” quotes one of the creators, Samuel Fulton, as stating:  “We’re trying to make robots as quickly and cheaply as possible.” More power to him and his colleagues.

As I read the article, all I could think about was what a great play thing it would make.  And then, I read this paragraph:  “Mr. Felton’s sheet is not simple paper, but a composite made of layers of paper, a flexible circuit board and Shrinky Dinks* — plastic sheets, sold as a toy, that shrink when heated above 212 degrees Fahrenheit (emphasis mine).”

So, not only would it make a great toy; it’s actually in part made from a toy.