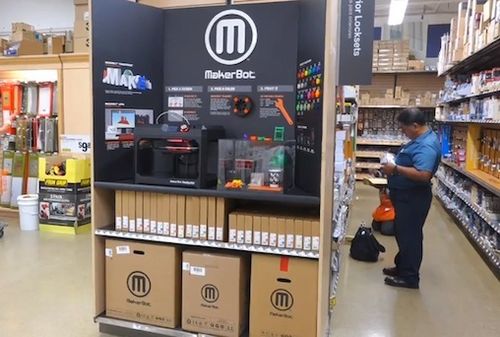 There comes a moment when the future becomes the present.  For 3D printing, that may have been last week when Home Depot began selling 3D printers.  3D Printing is potentially a disruptive technolgy for the manufacturing and retail industries that is on a par with the rise of the ebook and music downloads.  Because 3D Printing avoids traditional forms of manufacturing it can bypass factories, container ships and trucks.  It can also bypass retailing by allowing owners to make products in their family room or bedroom.

Selina Wang, in her Bloomberg article, “Home Depot Starts Selling 3-D Printers in Stores,” writes about that retailer's desire to be ahead of the curve. She quotes a Home Depot spokesman as putting it this way:  “Home Depot is selling devices from MakerBot, a 3-D printer maker acquired by Stratasys Ltd. (SSYS:US) last year, in 12 locations as part of a pilot project, the companies said… The effort will include stores in California, Illinois and New York.  It’s a pilot for us to test a potential disruptive technology, and to make sure we are on the forefront of a new innovative product…”

This is a big move for Home Depot because they are not just putting out some product and seeing if it sells.  They are investing in training so their sales associates are as knowledgable about a 3D Printer as they are about a hacksaw or a drill bit.

According to the article, retail sales of 3D printers are anticipated to increase from $80 million in 2013 to $600 million by 2017.  That’s nice but not overwhelming.

So, Home Depot is doing this  not because they are anticipating a quick return on investment but because they want to be seen as an established provider when 3D Printers become a standard piece of equipment for builders and contracters as well as a household appliance for do it yourselfers.  I find it impressive that a leader in an old school industry, “Housewares / Hardware” is taking a position that most retailers have yet to take.   This is one to track.